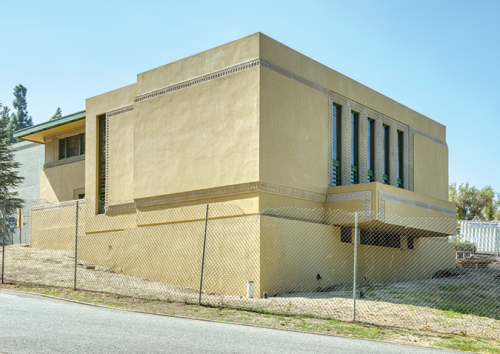 Crews are working on the interior of Residence A at Barnsdall Art Park. (photo by Stan Ecklund)

The Los Angeles City Council approved $2.95 million on Nov. 29 for Barnsdall Art Park in Hollywood to ensure renovations will be completed at a guest house designed by famed architect Frank Lloyd Wright.

Known as Residence A, the three-story guest house is steps away from the historic Hollyhock House, a Wright masterpiece in Barnsdall Park that was included on the UNESCO World Heritage List in 2020. Residence A, which is perched on a slope overlooking the 4800 block of Hollywood Blvd., has been under renovation since 2017. Prior to that, it had been closed for decades after sustaining heavy damage during the 1994 Northridge earthquake.

Last December, city officials celebrated the completion of exterior renovations at Residence A. Work on the interior is currently underway, and the newly-approved funding will be used to complete the project, anticipated in late 2024.

Outgoing Los Angeles City Councilman Mitch O’Farrell, 13th District, supported the restorations and authored the motion that led to the $2.95-million allocation. He said plans call for Residence A to eventually open to the public, along with Hollyhock House, which reopened for tours in August.

“This office took on the completion of the restoration of the Hollyhock House and helped pave the way for it to become a designated UNESCO World Heritage Site. This follows in the footsteps of continuing to add value to the entire Barnsdall Art Park as a one of a kind historic resource for the city of Los Angeles, and the only UNESCO World Heritage Site in the state of California in the cultural and built environment category,” O’Farrell said. “My belief, with Residence A in particular, that as the only previously completely-neglected Frank Lloyd Wright-designed home in Los Angeles, that it was important that I do everything in my power while council member to save the house and completely renovate it and preserve it for all future generations.”

Hollyhock House was designed and constructed between 1919-21 for Pennsylvania oil heiress Aline Barnsdall, who was an ardent supporter of the arts. Barnsdall donated Hollyhock House and the surrounding hilltop property to the city in 1927.

Barnsdall Art Park is managed by the Los Angeles Department of Cultural Affairs and includes galleries and a theater, as well as Hollyhock House and Residence A. Hollyhock House curator Abbey Chamberlain Brach said the funds will enable crews to finish work on intricate interior details.

“[The] additional support keeps the project well on track. Phase one of restoration work was finishing a lot of structural building system issues, seismic retrofit, getting a watertight roof, which is always critical for these structures, as well as really remarkable exterior restorations of the house thus far that allow us to interpret how the building worked as part of the larger site plan,” Brach said. “But since then, [we have been] working on interior finishes. We’re moving forward with bringing on a landscape designer to help us develop an ADA-accessible access to the site so that we can [hold programs] both indoors and out. These final finishes always take the longest. There’s a lot of material analysis and sampling that needs to be done so that we can properly restore the historic red gum (wood) trim work, perfectly match the interior plaster [and] restore the built-in furniture elements as well as some of the movable furniture.”

Brach said once the work on Residence A is finished, administrators will look for ways to use it as an educational resource.

“The tour program at Hollyhock House reopened in August, and the wonderful reception and the sold out tours that we’ve been running [are] a constant reassurance that the tours are the perfect model for what we’re going to be doing at Residence A,” Brach added. “And given the large living room space (in Residence A), there might be opportunities for mixed use programs as well, which is really exciting to think about how these two buildings work in tandem to speak to Wright’s design, as well as such a remarkable campus design and how the two buildings complement each other.”

O’Farrell added that although he was not re-elected and will be stepping down from the City Council, he plans to continue supporting Barnsdall Park any way he can.

“It’s a really comprehensive rehabilitation project that is now fully-funded, and we couldn’t be couldn’t be happier,” O’Farrell said. “It’s a benefit for L.A. residents and visitors from around the world.”

Two seats for West Hollywood council remain up for grabs