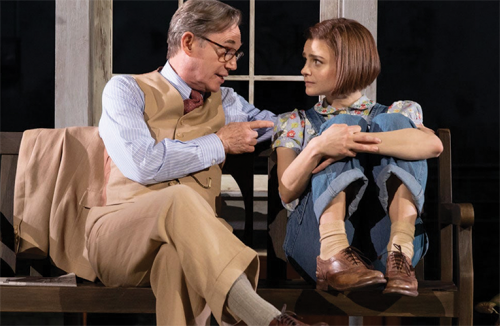 Richard Thomas plays Atticus Finch opposite Melanie Moore as Scout Finch in “To Kill a Mockingbird.” (photo by Julieta Cervantes)

“If what doesn’t kill us makes us stronger, what do the things that kill us do?”

The story, and its 1962 film adaptation starring Gregory Peck, are seared in popular culture. The book, an Alabama woman’s semi-autobiographical observation on race and culture in a Depression-era southern community, struck a nerve upon release in the midst of the Civil Rights movement. A Pulitzer Prize-winner taught in high schools across the country, it continues to be heralded as an honest depiction of racial injustice.

Sorkin is one of the most-honored film and television writers in the modern era. Coming to prominence with his work on the screen with movies like “A Few Good Men” and “The American President,” Sorkin created the Emmy-darling “The West Wing.”  He has gone on to direct, too, with recent Oscar-nominated films like “The Trial of the Chicago 7.” His bread-and-butter is politically-and-socially charged stories, with even last year’s Lucille Ball biopic “Being the Ricardos” centered around the Communist Red Scare of the 1950s. Writing “Mockingbird” for the stage is decidedly in his wheelhouse, and boy if Sorkin doesn’t knock it out of the park.

As a writer, the quality of the text is always the first thing I notice in any form of entertainment. I have long been an admirer of Sorkin’s penchant for great dialogue. I’m not 100% certain anyone actually talks like people do in a Sorkin piece, but good God do I want them to.

It’s been a while since I’ve seen the Peck film or read the Lee novel. Watching the play, I had forgotten a few aspects of the story. That said, my immediate impression was how differently Sorkin’s adaptation treats the character of Atticus Finch.

In this version, Finch is more of a protagonist than the character of Scout, and Sorkin shades the character with decided helpings of failure, also fleshing out his relationship with the family housekeeper, Calpurnia. The divide in perspective between the white and Black residents of the town is more thoroughly explored. Whereas the book uses the child’s viewpoint as a way of showing how black-and-white right and wrong can be, Sorkin takes the story and, through an adult lens, shows how gray right and wrong can feel.

In case you skipped high school English, “To Kill a Mockingbird” follows the Finch family, widowed Atticus and his children Scout and Jem. During a hot Alabama summer, the upstanding lawyer Finch represents a Black man wrongly accused of rape.

Spoiler alert: he loses the case, and the man is killed brutally under suspicious circumstances. The father of the accuser, meanwhile, goes after Atticus’ children, and everyone has to learn some lessons in the process.

The false perception that the United States has ever come close to something resembling racial equality is given a heavy indictment, and the truth within the text is brutally honest. The shadow of Jim Crow and the Civil War loom heavily in “Mockingbird’s” Alabama town, and the failure of the white man to save the Black man shines a light on the harsh reality that the progress society has made has not wiped away the stench of prejudice. The story works because Atticus is not a white savior – a common story trope of a white man seemingly “fixing” racism that has been widely criticized in recent years with films like “Green Book.”

Atticus instead is a representation of the reality of white saviorism.  A white guy isn’t going to solve racism. The problem is systemic and deep-rooted within society, and looking that in the face is the only real way to move forward.

In case it wasn’t obvious by this point, I loved this play. Everything about the production is crisp with tight direction. The performances in the touring show, currently at the Hollywood Pantages Theatre, were uniformly outstanding, with Richard Thomas (John-Boy to fans of “The Waltons”) knocking Finch way, way, way out of the park. With Finch’s perspective taking over, there are layers that Thomas has to portray in a character that becomes increasingly conflicted with his own empathetic perspective as the story carries on. There is not a false note. I wish there was a touring-show Tony for the man.

The line I first quote in this review, though, is from Jacqueline Williams’ Calpurnia, who becomes the heartbeat of the show, grabbing many of the play’s emotional lines by the teeth and wringing the optimum amount of poignance out of each word.

It is an important commentary on racial equity. While the setting is nearly 100-years in the past, its message is, sadly, all too close.

“To Kill a Mockingbird” runs through Nov. 27.

‘Black Panther: Wakanda Forever’ tries to do too much