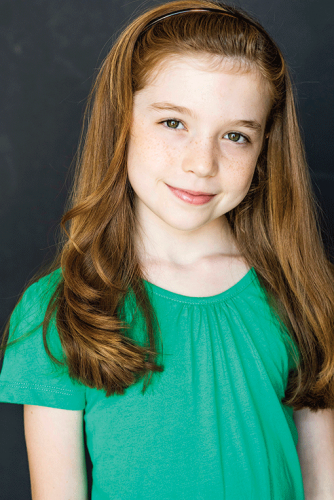 Sadie Reynolds, an 11-year-old Los Angeles resident has been cast as Mary Lennox, the adventurous 10-year-old lead in “The Secret Garden,” a role Daisy Egan made famous when she became the youngest female recipient of a Tony Award for Best Featured Actress in a Musical. Sadie has been added to the previously announced Drama Desk and Drama League nominee Sierra Boggess, with more casting to be announced at a later date. “The Secret Garden” will play at Center Theatre Group / Ahmanson Theatre Feb. 19 through March 26.

This magical musical follows the young, orphaned Mary Lennox as she’s sent from her home in India to live with her reclusive uncle on his haunted English country estate. Guided by an exceptionally beautiful score, audiences will be swept away with Mar’’s unapologetic curiosity as she is joined with the help of unlikely companions sending her on a thrilling quest to untangle the pieces of her family’s past and, most importantly, discover herself.

“Just to step on the Ahmanson stage is going to mean the world to me. I’ve loved musical theatre for as long as I can remember, and to be doing it for real is going to be amazing,” Reynolds said. “I feel really happy; I never thought when I first saw ‘The Prom’ [at the Ahmanson Theatre] that I would get this role on the same stage two months later.”

“We had an extensive casting process on both coasts and Sadie’s strength of character, paired with her vibrant singing voice and her bubbly personality made her the perfect and only choice for this role. I am so happy to give Sadie her stage debut, and so excited for audiences to see her shine in ‘The Secret Garden”director and choreographer Warren Carlyle said.

Tickets for “The Secret Garden” are on sale now and start at $40. They will be available through centertheatregroup.org, Audience Services at (213)972-4400 or in person at the Center Theatre Group Box Offices (at the Ahmanson Theatre) at The Music Center, 135 N. Grand Ave.. Performances run Tuesday through Friday at 8 p.m., Saturday at 2 p.m. and 8 p.m., and Sunday at 1 p.m. and 6:30 p.m.

The sun comes out at the Dolby for ‘Annie’