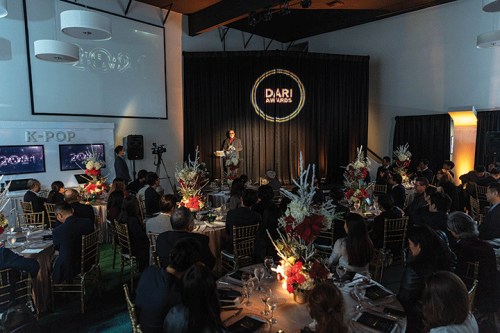 The 2022 Dari Awards will be held on Dec. 6. (photo courtesy of KCCLA awards)

This year, the Ministry of Culture, Sports and Tourism (minister Park Bo Gyoon, MCST) Ministerial Commendation will be presented in three categories.

The 2022 Person of the Year will be awarded to Soo Hugh, who is the executive producer of the Apple TV series “Pachinko” adaptation; the Business of the Year will be awarded to WEBTOON Entertainment, which has helped to expand the webtoon market through IP discovery collaboration with famous studios such as Paramount, DC Comics and Marvel Entertainment; and Best Business Partnership will go to the largest performance production company in the U.S. Live Nation Entertainment, in recognition of its contributions in widely popularizing K-pop performances in North America.

“This year, more than ever, I realized the achievement of spreading the charm of Korean Wave content around the world,” Director Sangwon Jung said.

“K-content in various fields such as K-drama and K-Pop is recognized for its excellence as global content,” said Sung Ho Ju, head of the U.S. business center at the Korea Creative Content Agency.

Celebrating its 17th year, the Dari Awards has contributed to enhancing Korea’s national image and status through dramas, webtoons and K-POP. The 2022 Dari Awards will take place on Dec. 6 at 6:30 pm at the Korea Center, located at 5509 Wilshire Blvd. The award ceremony will include a banquet and networking event. RSVP is required. For information, visit kccla.org, kocca.kr or contact hannah@kccla.org.