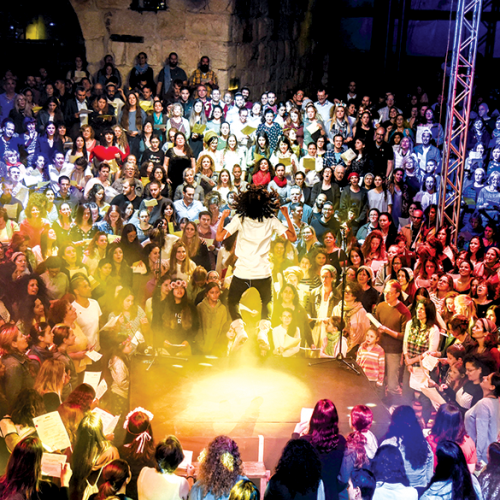 Israeli “social musical-initiative” Koolulam, which has been recognized for fostering harmony around the world, is playing its first show in L.A. on Dec. 15. (photo courtesy of Koolulam)

When Ben Yaffet takes the stage at the Saban Theatre on Dec. 15, he will be filled with anticipation.

Yaffet is co-founder and musical director of Koolulam, an Israeli music act that teaches audiences how to sing a capella renditions of popular songs, breaking down social divisions and fostering togetherness along the way.

Though Yaffet is the “conductor,” he takes his cues from the crowd. No two are the same, making each Koolulam performance unpredictable, which is exactly what makes them special, he said.

“We’re so excited to come to L.A. because this is going to be our first time there. And every place [has] its own people and its own vibes, its own energy,” Yaffet said.

A Koolulam event begins with a warm up to get the participants acquainted before they are split into baritone, alto and soprano sections, Yaffet said. Then they begin to practice, a collaborative experience that takes between 30 and 40 minutes, with Yaffet leading from the stage while participants in the crowd help each other master the melodies and the lyrics, Yaffet said.

Live instrumentalists and D.J.s provide backing music, and neon lights wash over the faces of the crowd as they sing, many of them swaying in place or hugging family members, sheet music in hand. Yaffet does not push back if the crowd takes the song in a direction he did not intend.

Prior to Koolulam, Yaffet founded VocaTikvah, an organization that used singing to empower youth from Tel Aviv’s working class Hatikvah neighborhood. After a VocaTikvah show, Yaffet was approached by filmmaker Or Taicher, who said that he was inspired by the performance and wanted to be involved.

Taicher became the artistic director, and Michal Schneiderman became CEO of Koolulam. Though none had previously known each other, they quickly gelled, and within seven months Yaffet began leading thousands of people in song.

“It seems like the stars made us meet,” Yaffet said.

Since then, more than 350,000 people have participated in 250 Koolulam events around the world.

Koolulam uses its performances to advocate for specific causes. While promoting breast cancer awareness, Koolulam led a performance of “Let’s Get Loud” by Jennifer Lopez. Their performance caught Lopez’s eye, and she used some of Koolulam’s musical arrangements during her 2020 Superbowl Halftime Performance with Shakira, Yaffet said.

He calls Koolulam a “social-musical initiative,” a space where people from all backgrounds come together, sing and create music.

During a performance in 2018, approximately 3,000 Israeli Jews and Muslims converged in the port city of Haifa to learn and perform “One Day” by Matisyahu, an American Jewish artist who infuses rap and rock with Jewish spirituality.

The following year, UNESCO selected Koolulam’s rendition of “One Day” for broadcast on over 2,000 radio stations during World Radio Day.

“We feel like music is the international language. People from all over can understand and feel through music, no matter the language of their mother tongues,” Yaffet said.

Yaffet recounted a recent concert in France, where he opened the performance by telling the crowd he didn’t know how to speak their language. Even though most of the crowd couldn’t understand what he was saying, he was able to lead them. Within 30 minutes, everyone knew their part, he said.

“In that moment, I understood again, no matter where you are, what language you speak, this is a way to connect people,” he said.