Horvath reflects on WeHo, looks ahead to new role 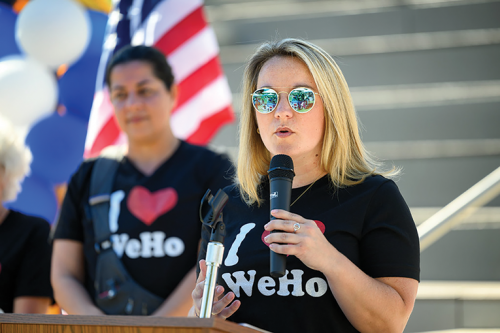 Lindsey Horvath speaks at the opening of the West Hollywood Aquatic and Recreation Center, a facility she was instrumental in developing. (photo by Jon Viscott)

Lindsey Horvath has been a prominent West Hollywood figure for most of her adult life, first joining the West Hollywood City Council in 2009 when she was just 26 years old. She had previously been a member of the city’s Women’s Advisory Board. When she lost her election bid in 2011, she kept working with the city as a member of the transportation commission, ultimately winning her 2015 campaign to rejoin the council and going on to serve two terms as West Hollywood’s mayor.

“I’m proud of bringing in a whole new generation of leadership into the city,” Horvath said. “We brought so many new voices and perspectives, especially young people, onto boards and commissions. We created task forces and all different kinds of groups. When I became mayor in 2015, I appointed the mayor’s Millennial Task Force. Because 50% of our city is under the age of 40, I wanted to make sure we had representatives who spoke to a new generation in terms of their leadership.”

It’s been a wild ride for Horvath, leading the city as mayor during the contentious 2016 presidential election and the COVID-19 pandemic.

“When I ran for reelection in 2019, I didn’t expect that we would be tackling COVID and an economic downturn. The George Floyd protests and uprisings and everything that we’ve seen, but people elect us to meet the moment. And I believe that we did in terms of our leadership as a community and a place where people could come for safe refuge. I was honored and proud to have had a part in making that happen. I think that experience will help shape and inform how I serve diverse communities going forward in this new role,” she said.

Now, Horvath turns the page in her political career with her election to the Los Angeles County Board of Supervisors, 3rd District.

“I was asked by a number of people who I greatly respect and admire [to run for supervisor],” she said. I also have always been driven by a desire to be of service, to leave the world better than I found it and to give back in ways that I feel are appropriate, given how much my city and this whole region has given to me in terms of all of the opportunities that I’ve had. So, I look for opportunities to be of service. I certainly wasn’t expecting this one to be what I did next.”

Horvath said that she was especially grateful that her new position will give her the opportunity to work on issues she’s most passionate about.

“[Being supervisor will allow me to] protect renters and create affordable housing options, expand our regional transportation, network and infrastructure, focus on working people, and make sure that we’re improving quality of life and [making life] more affordable. And I’m incredibly grateful that, you know, there will be so many resources and opportunities to make a difference.” 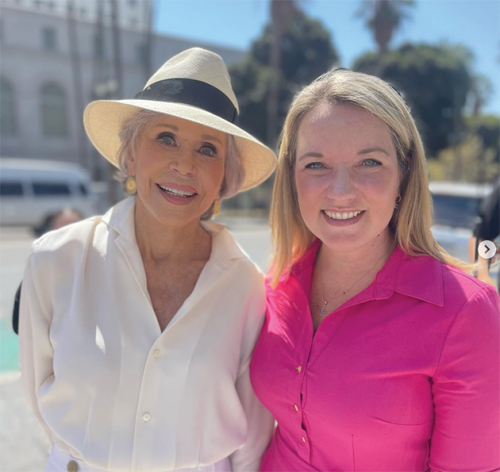 Horvath had the support of many prominent figures in the Democratic party, including California First Lady Jennifer Siebel Newsom and Los Angeles Mayor Eric Garcetti, as well as activists like Jane Fonda and Dolores Huerta.

“A time like this requires all of us to step up and help each other, and [it] is my sincerest intention to use my leadership to call upon the coalition that we have built because it [isn’t] just how we win a campaign, it’s how we lead effectively if we listen to each other,” she said.

Horvath was also supported by many of her current and former City Council colleagues.

“Lindsay Horvath is one of the most upstanding, ethical and empowering individuals I’ve ever been able to call a colleague, and I’m very honored to call her a friend,” Councilman John Erickson said. “The thing I love most about Lindsey is that she doesn’t just put words into action. As she’s … climbing that metaphorical ladder, for wherever she’ll end up, she doesn’t continue to look up, she looks back, and she pulls up behind her. And who she’s pulling up are the communities, the new leaders and the people that are there to help make the world a better place with her. And that’s not only honorable, it’s gallant. We rarely see leaders like Lindsey Horvath.”

“Lindsey has a deep well of empathy and very strong backbone,” Councilman John D’Amico said. “It’s my experience that when she sets her mind to accomplishing something she gets it done with grace and style. I have watched that play out over and over. And more than all of this, we started as unfamiliar colleagues and I am happy to say we are finishing as friends, and I could not be happier for her and her success.”

Looking back on her time on the City Council, Horvath was proud of her achievements.

“[I’m proud of] our progress on the Crenshaw Northern Extension of Metro rail to West Hollywood, something I’ve been a tireless champion of and something I’m very excited to continue my work on now having a seat at Metro,” she said. “I would say our focus on women, creating the community response team to domestic violence, to our more recent actions, [including] ensuring that women and pregnant people will have access to the full range of reproductive health care services.”

Horvath’s last council meeting was Nov. 21. West Hollywood’s new council members take office at the next meeting on Dec. 19, but Horvath will resign her seat prior to that meeting.

“All of the memories that I’ve made in that space, both physically and in the space of my community, they’ll live on with me, and they will be what I will take with me to the county board. I know that I wouldn’t be able to do what I’m going to do next if I hadn’t done what I did in West Hollywood, and I’m grateful to the community for giving me that opportunity,” Horvath said.

Join in the holiday spirit at The Ebell of Los Angeles