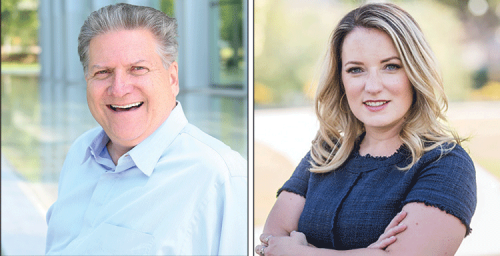 Hertzberg has served the California’s 18th Senate District, which covers parts of the San Fernando Valley, since 2014. He previously served as a California assembly member from 1996 to 2002, where he was speaker from 2000-02.

Hertzberg sees L.A. County as needing new leadership to send it in a different direction. “I’m running for supervisor because our county government has dropped the ball in many ways,” Hertzberg said.

“From a lack of responsibility to failing at implementing policies, Angelenos deserve better. In my roles as a clean energy entrepreneur, State Assembly Speaker and Senate Majority Leader, I have worked across the aisle, gaining bipartisan support for impactful policies that have changed our state for the better. We’ve invested billions in L.A. County at the state level – but the county has failed at implementation. Now, I’m running for supervisor to fix the mess and take responsibility for our issues like the homelessness crisis, rising crime rates, and lack of affordable housing while protecting reproductive freedom and access to abortion and advancing environmental protections and innovations.”

Hertzberg said his years of experience make him uniquely qualified for the supervisor position. He added that homelessness is the most pressing issue facing the city.

“It’s a massive crisis that demands attention and better implementation on behalf of the county. It’s a moral crisis, public safety crisis, and quality of life crisis. We have problems with implementation, coordination, and responsibility – not a lack of resources. We must transform the L.A. Homeless Services Authority and our Department of Mental Health so that they can operate together, out of their silos. Unlike my opponent, who claims she solved homelessness in West Hollywood when she just moved individuals experiencing homelessness across her city’s border, I believe we must have a comprehensive county approach. An increase in affordable housing is one solution that should be prioritized – I support programs to build more housing units and transform old buildings like L.A. General [Hosptial] into rent-controlled buildings. The Board of Supervisors represents 88 cities, 86 school districts and the 526 subdivisions of L.A. government and must look at the big picture – moving people around is not a practical solution and benefits no one. This is a complex task and one that requires experienced leadership from the next supervisor. The scale of the problem is simply too great to expect anything else – once again, pointing to the importance of my work in state government.”

Hertzberg also said he wanted to help bring a clean energy future to the city.

“I want to bring Los Angeles into the 21st century when it comes to environmental technology and innovation. That’s why I helped pass California’s landmark law ensuring 100% clean energy by 2045, as well as many other significant bills to combat climate change,” he said. “As a lifelong Democrat, Angeleno and born and bred Californian, I am invested in solving L.A.’s issues and taking accountability when others won’t. I will take risks to get things done, show up in our communities and work my guts out for folks.”

Horvath sees her role as a local community leader as positioning her to make a difference in L.A. County.

“I am a small business owner, a renter and a councilwoman who has worked at the local level implementing and delivering solutions for the broader region by engaging residents on the specific needs of each and every community,” Horvath said. “In this time of crisis, we need leaders with on-the-ground experience who know where the county is failing to meet the moment and where to fill the gaps.”

Horvath struck a contrast between herself and Hertzberg.

“My opponent talks a big game, but has no real on-the-ground experience delivering for our communities in the ways we need. While he has thrown money at problems from Sacramento, I have delivered solutions on the ground. I know which programs are most effective, where they’re failing and how to fix them. I’m a collaborative problem solver who brings communities together to tackle our toughest challenges,” she said.

Horvath also mentioned homelessness, as well as public safety, as the most pressing issues in the county.

“We must meet people where they are with the relevant support and resources they need – including mental health services, addiction recovery and job training – instead of leaving them to face the challenges of navigating through an endless bureaucratic process on their own. We must invest in solutions that take into account the root causes, rather than wastefully spending more public dollars without solving the foundational problems. Voters have shown a willingness to tax themselves to create revenue and funding streams to solve our homelessness crisis, but they have not seen tangible results in their neighborhoods. It is my job as county supervisor to deliver on the promises of Measure H, with the help of Measure HHH in the city of Los Angeles, and ensure transparency and accountability in our public spending,” Horvath said.

Horvath mentioned solving the climate crisis as a goal if elected.

“We must invest in the county’s award-winning sustainability plan to fight climate change and get L.A. County on the path toward a clean energy future. There is a stark contrast between myself and my opponent in this regard,” she said, noting endorsements she has earned from the Sierra Club, California Environmental voters and other climate organizations. “It is critical that we protect every community from the devastating impacts of climate change, all the way from Hollywood to Pacoima to every hillside community in the Santa Monica Mountains. I will do that by working with every community on their unique needs, fighting extreme heat, wildfires and droughts. We need a climate champion as our next supervisor, and that is exactly what I will be.”

Horvath also noted that her experience in West Hollywood puts her in a unique position to serve on the board of supervisors.

“My opponent has been focused on the partisan battles of Sacramento his entire time in office. He has not had to implement change on the ground, and does not have concrete plans or a clear understanding of what the county role requires in delivering services for our communities. When he ran for mayor of Los Angeles, the voters rejected his candidacy early on, as they could not trust his ability to deliver. In my most recent term as mayor, I became the longest consecutively serving mayor in [West Hollywood] history, having my term extended during the COVID19 crisis. As a result, we were rated both one of the safest places to be in L.A. County as well as the most business-friendly by the LAEDC.”

Horvath also pointed to her leadership on reproductive justice and renters’ rights and the support of women’s organizations like Emily’s List among her qualifications.

“L.A. County is the largest county in the country, which gives us a unique platform to not only seek help in innovating to solve our most pressing problems, but also to export solutions to the rest of the country when we find what works. From social service delivery to criminal justice reform to centering people in the work of our government, L.A. County has a unique opportunity to be a standard bearer in how we care for each other, if we have the courage to meet this moment and deliver change. I am ready to get to work for the people of Los Angeles,” Horvath said.