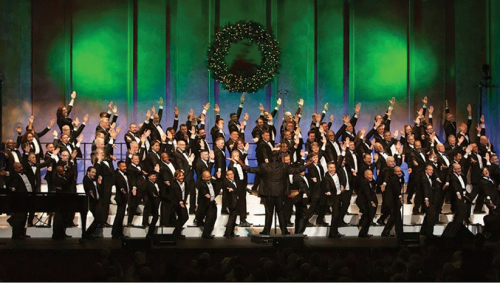 Kicking of its 44th season, “A Motown Holiday” by the Gay Men’s Chorus of Los Angeles will perform on Dec. 17 and 18. (photo courtesy of GMCLA)

“A Motown Holiday” is a massive choral tribute to Motown’s beloved hits and holiday music that captured a generation and continues to live on. The chorus will sing and dance to the season’s greatest from the greats of Motown and beyond: The Temptations, The Supremes, The Ronettes, Donny Hathaway, Stevie Wonder, Marvin Gaye, Smokey Robinson, The Jackson 5, The Weather Girls, Martha and the Vandellas and so much more from the best of Motown.

“Over the years, GMCLA’s holiday concerts have become a beloved tradition in the Los Angeles area because of this Chorus’s signature blend of verve and first-rate talent,” GMCLA executive director and producer Lou Spisto said. “This year we’re bringing the original Motown arrangements to holiday classics, pop hits that were made famous, plus a host of special surprises with “A Motown Holiday.” So far, the response has been fantastic — we’re selling so well, and we’re thrilled. Adding the incredible Shanice, whom we just adore, and our Motown Quartet will add even more music, variety and great singing to the production. We can’t wait to see our audiences again for the start of GMCLA’s 44th season.”

“A Motown Holiday” will be presented Saturday, Dec. 17 at 8 p.m. and Sunday, Dec. 18 at 2 p.m. at the Alex Theatre, 216 N. Brand Blvd., Glendale. Tickets start at $29 and are available at gmcla.org. For information on the Alex Theatre, visit alextheatre.org.

Groundlings gets cozy for the winter