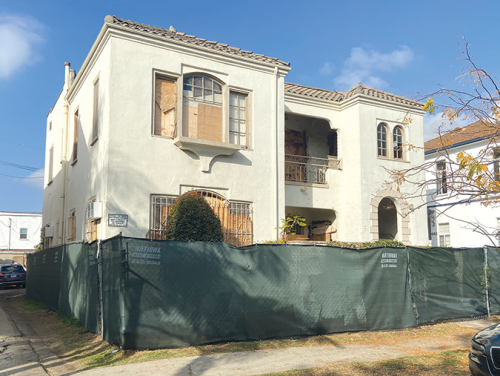 Firefighters extinguished a blaze on Nov. 24 in a vacant fourplex at 439 N. Sierra Bonita Ave., just north of Beverly Boulevard. The cause remains under investigation, but authorities believe the fire was started by homeless individuals, as there were signs of forced entry into the boarded building. The LAFD received a 911 call around 9:35 p.m. and firefighters located flames in a bedroom on the second floor of the structure, LAPD spokesman Brian Humphrey said. The fire was extinguished at 9:55 p.m. and no injuries were reported.

Humphrey said the LAFD responds to more fires on Thanksgiving Day than any other day of the year due to cooking fires, and added that kitchen fires are also common during the holiday season in December. He cautioned people to check inside ovens for flammable items before using them, and to never leave pots and pans unattended on stovetops. Residents are also cautioned to be careful with Christmas trees. Never place them near fireplaces and heat sources, and make sure Christmas trees have water and do not become dry.

“We stay busy every season with those fires,” he said. “It’s typically one of the busiest times of the year.”