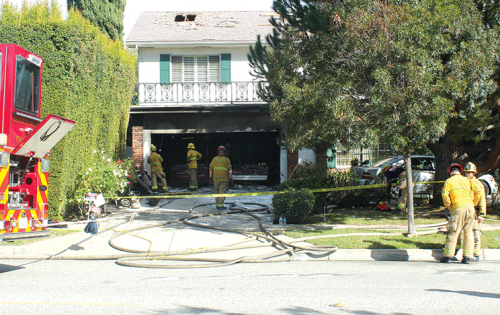 A fire burned a garage on North Rexford Drive, destroying two cars parked inside and damaging parts of the two story home. (photo by Joey Waldinger)

In approximately 40 minutes, Hand and more than 40 firefighters had extinguished the blaze, which had torched the garage and two cars parked inside, and filled the rest of the house with smoke, he said.

Neither the firefighters nor residents of the home suffered any injuries, Hand added.

“There’s extensive smoke damage and some minor fire damage within the house,” Hand said. “They’re not going to be able to go back in for some time,” he added, referring to the husband and wife who live there.

At 11:01 a.m., officers received a report that a vehicle had caught fire inside a “a structure,” and by the time they arrived, the fire had consumed the garage and the other car parked inside, Hand said.

He added that the husband was outside of the home when officers received the call and the wife was taking a shower. She had evacuated the residence by the time the fire trucks arrived.

The firefighters’ efforts were complicated by the garage door, which closed when they initiated their attack, forcing them to cut through it to extinguish the flames inside, he said.

“A lot of it burned through, so we had a difficult time getting water on the fire once the springs from that door melted,” Hand said.

Approximately ten minutes after extinguishing the garage fire, firefighters confirmed there was no fire in the rest of the house, Hand said. BHFD officers were joined by crews from Los Angeles Fire Department and L.A. County Fire Department, he added.

Once firefighters left the scene, the street re-opened to traffic at approximately 1 p.m. Two BHFD officers investigated the blaze.

“We’re going to retain control of the scene until the investigation is complete, and then we’ll turn the residence back over [to the husband and wife],” Hand said.