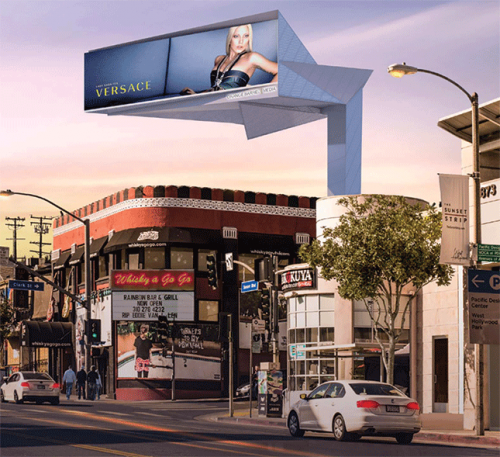 A billboard atop the Whisky a Go Go will be converted to a digital sign. (Beverly Press/Park Labrea News file photo)

A two-sided billboard has sat atop Whisky a Go Go on the Sunset Strip for decades, but new digital signage will soon adorn the roof of the famous night spot. Located at 8901 Sunset Blvd., the Whisky is an official West Hollywood cultural resource. Opening in 1964, numerous well-known music acts have performed at the venue over the years, ranging from the Doors and Elton John to AC/DC and Fleetwood Mac.

“The Whisky is considered a cultural resource in the city of West Hollywood and around the world,” Mayor Lauren Meister said. “The newly approved digital billboard will provide revenue for the ongoing maintenance of this iconic venue.”

The new two-sided digital billboard was approved by the City Council on Nov. 21. As part of the agreement for this development, the Whisky’s owner (the Maglieri family) is required to maintain the building as a nightlife, entertainment music performance venue. The high-visibility billboard is anticipated to bring in $2 million in annual revenue, which, as part of the agreement, will be shared with the city. According to a staff report, the city will be owed a public benefit payment of $1,298,311 each year.

“The billboard and the Rock Walk will, no doubt, enliven the Strip. In addition, as a condition of approval, I asked that staff work with the applicant to provide some improvements to the north side of the property as a direct public benefit to the neighborhood,” Meister said.

In March 2019, the City Council adopted a billboard policy for the Sunset Strip aimed at helping the famed street become an economic engine for West Hollywood, allowing for revenue

sharing between billboard owners and the city. A city staff report “The billboard at the Whisky is an important aspect of ensuring our historical landmarks not only continue to thrive but also reinvent themselves,” Councilman John Erickson said. “The Strip has been and is coming alive in so many interactions and this billboard not only highlights the legacy and history for the Strip, but also the future.”

The billboard plan was praised by community members during the public comment portion of the council meeting, particularly for its role in preserving the nightclub.

“I remember dancing in this local cultural resource in the summer of 1971 on our iconic Sunset Strip, and not in one of those iconic gogo cages, but the dance floor,” West Hollywood Preservation Alliance member Victor Omelczenko said. “I’m so happy that the city recognizes the importance of this building as a historic local cultural resource.”

“As the city and Sunset Boulevard have evolved over the years, it has been a challenge to keep the historic venues like the Whisky preserved while still being an integral part of the modern skyline,” said Bill McBride, of McBride Wealth Management, who advises the Maglieri family. “The billboard atop the Whisky has long stood as a beacon for music lovers across the globe. And as we as the city upgrade to the digital age, I believe that digitization of this billboard is a key component in keeping up with the modernization of the Sunset Strip.”

While community members attending the city council meeting on Nov. 21 supported the billboard, Erickson addressed residents who might be concerned about any disturbances the new digital sign might cause.

“Community input is critical to all of what we do on the Strip and while I wasn’t on the City Council when these billboard programs were approved, I know that our staff and the applicants are committed to ensuring all voices are heard and all concerns are addressed as best as they can. I’m always available to anyone that wants to voice those concerns, and we do have to look at what the Strip will look like not only in the next six months but also a year, five years, etc., into the future,” Erickson said, adding that a projected date has not been determined for the sign’s completion.

What percentage of the whiskey’s sign revenues are paid to the city?