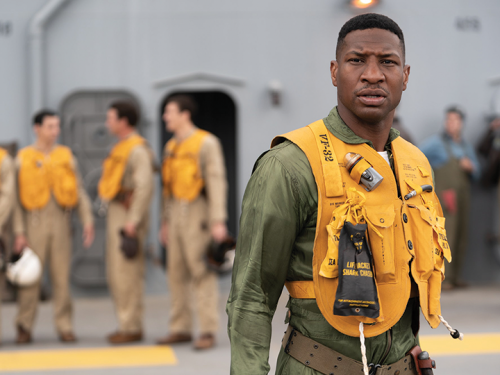 In honor of Veterans Day, a film depicting the real-life experiences of Naval officers Jesse Brown and Tom Hudner during the Korean War is opening nationwide Nov. 23.

“Devotion” is based on the book “Devotion: An Epic Story of Heroism, Friendship and Sacrifice” by Adam Makos, which follows Brown (Jonathan Majors), the first Black Naval aviator, and his wingman Hudner (Glen Powell).

The story is personal for Gary Graham, Jr., the executive producer of Hollywood Confidential, a platform that celebrates and supports film and television industry creatives who are people of color.

“As the son of a black naval aviator, this story was always legendary in my family. I had dreams of making this into a film myself at one point, as an aspiring director and actor,” Graham said. “I eventually learned that the story had finally been picked up by a major studio (Sony) and that the director of the film, J.D. Dillard, was very much like me. J.D. has shared that he was seeing a lot of his dad in the story, something that really resonated with me.”

Graham knew he had to get involved with the film in some capacity, “to help promote it and open the door for more conversation about the history” and the current status and outlook of diversity in aviation.

“I reached out to Bruce Dillard, J.D.’s father, who’s a former member of the U.S. Navy’s Blue Angels, and was a bombardier/navigator in the same aircraft my father was piloting around the same time in the late 1980s. He was able to put me in contact with Sony and Black Label Media to discuss ways we could further use this platform and opportunity. We are currently in the planning phase of a screening event that would include a panel discussion to talk about the history and why it is relevant today,” Graham said.

More details on that forthcoming screening will be provided as they become available.

In discussing the unique importance of the story, Graham highlighted how the conflict in Korea has become known as “The Forgotten War,” left to history as a footnote between World War II and the Vietnam War.

“It was a three-year conflict and the first military action of the Cold War. North Korea was supported by China and the Soviet Union while South Korea was supported by the United Nations and primarily the United States. Those who served deserve to be recognized and honored,” he said. “This story was extremely impactful during the 1950s-60s, with our nation going through the divisive Civil Rights era. We are at yet another crossroads with politics and race-relations, but I believe we can learn so much from how it was handled historically and use those moments to apply lessons and gauge how much progress we’ve made,” he said.

Graham discussed how the movie’s importance intersects with his own family history.

“That is where my family’s legacy, my experience and recent work all came full circle. My father, Col. Gary ‘Gumby’ Graham Sr. (USMC ret.), is one of the very few black naval aviators to have held command positions. It’s even less common in the Marine Corps, where he commanded Marine Fighter Attack Squadron 224 and Marine Air Group 41. He’s now a senior program analyst with NAVSEA for the F-35 program office. My father’s brother, Capt. Michael R. Graham (USN ret.), was also very influential in my life. He was a USNA grad, commanded the U.S.S. Austin down in San Diego, and finished his Navy career as NAVSEA’s HQ Staff Officer/SWE Chief Technology Officer. My grandfather retired from the Air Force and served during a time period where it was very challenging to rise up the ranks and get promoted even as an enlisted service member. So, I’ve clearly felt I’ve had some big shoes to fill,” he said.

Graham went on to say that minority representation is still low in the aviation field.

“Their opinions and perspectives carry a lot of weight in the aviation and aerospace communities,” he said.

He expressed hope for the future of diversity in aviation.

“It’s encouraging that there are some steps being made to improve diversity, equity and inclusion. However, it will be an uphill battle against the traditionalists and those who are just completely unaware of stories like ‘Devotion,’ the history and the current data. The Navy just concluded another Aviation DEI Summit, I have been in contact with the director and I’m hoping we can ride the coattails of films like ‘Top Gun: Maverick’ and ‘Devotion’ to continue outreach efforts for such an important industry of our future,” Graham said.

For information about “Devotion,” visit devotion.movie.

‘Weird’ parodies the music biopic as it should