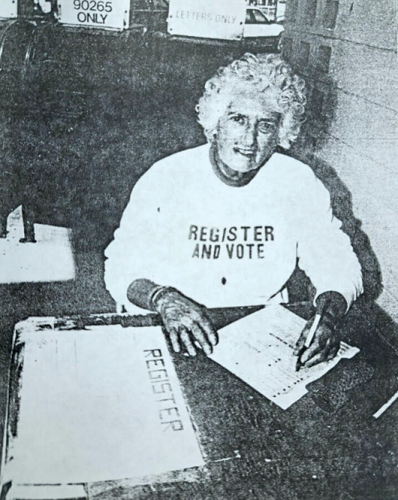 Sylvia Levin, wearing her signature sweater in 1990, is being honored posthumously. (photo courtesy of Chuck Levin)

In the summer of 1973, Chuck Levin was hired to register voters across California. To cover enough ground, he knew he needed the help of someone who was hardworking, reliable and up for the challenge. His mother, Sylvia Levin, was his first pick.

After the summer registration ended, Levin and his mother continued to recruit new voters.

By the time she died in 2009, Sylvia Levin had signed more than 47,000 people up to vote, and she is widely considered the most prolific voter registration activist in the history of the United States, Chuck Levin said.

On Nov. 20, her efforts will be honored with the dedication of Sylvia Levin Democracy Square at the intersection of Fairfax and Rosewood avenues, a nod to the registration booth she set up in front of Canter’s Deli for 23 years.

A single mom who grew up in Brooklyn before moving to Los Angeles in the 1940s, Sylvia Levin’s formal education ended after she graduated elementary school. She worked a string of odd jobs while raising two kids, Levin said.

She was inspired by helping people exercise their constitutional rights, and when she wasn’t taking the bus to Fairfax to canvass in front of Canter’s, she fanned out across the Westside and Malibu to register voters, he added.

In addition to Canter’s, she would set up registration booths at the Malibu Post Office, Westwood Federal Building, Westwood Village Farmers Market and Sunya Currie, a now-closed jewelry store on Abbot Kinney Boulevard in Venice.

People were “enchanted” by Sylvia Levin and appreciated her cause, and they were eager to lend a hand, her son said. She became close with the Canter family.

“You can’t do this alone. You have to have community support, merchants who are likeminded,” Levin said.

Jackie Canter, co-owner of Canter’s Deli, said that Sylvia Levin chose to register voters at Canter’s because Fairfax was the heart of the Jewish community in Los Angeles, and Canter’s attracted visitors from across the world.

“She was very dynamic. She believed in what she was doing, and she was very passionate about it,” Canter said.

Chuck Levin remains a dedicated activist. He has signed up more than 14,000 voters, and he still volunteers three times a week. There are approximately 5 million unregistered eligible voters in California, according to the Secretary of State’s Office.

“This is the 54th year I’ve been setting up my table in public, talking to strangers. Some people flash a smile and proudly say I’m already registered. Some people say I haven’t voted, or I haven’t registered in 20 years. And I would say, ‘This is your opportunity. It’s going to take three minutes,”’ he said.

In an era of increasing polarization, Levin sees his volunteer work as entirely nonpartisan, and he remains optimistic about the future.

“One of the signs I’ve made up says, ‘Your vote is the one that counts,’” Levin said. “I believe that, that’s my sentiment.”

While the Levins were appreciative of the recognition they received, they were not motivated by awards, Levin said. Their biggest reward has always been the satisfaction of registering a new voter.

“When we registered someone who just turned 18, or who hasn’t voted or hadn’t participated in two decades or three decades, that was a special moment, not just for them but for us,” he said.

Levin and city leaders have been discussing the dedication since 2019, and after the COVID-19 pandemic stymied their efforts, City Councilman Paul Koretz, a family friend, authored a motion in May to dedicate the square in Sylvia Levin’s honor.

“Los Angeles is grateful to this compassionate individual, who spent her time helping our community, making a difference and demonstrating participation in a vibrant democracy,” Koretz said. “A city treasure, Los Angeles is delighted to show its great appreciation for her courage, humility, tenacity, as well as our love for her human spirit.”