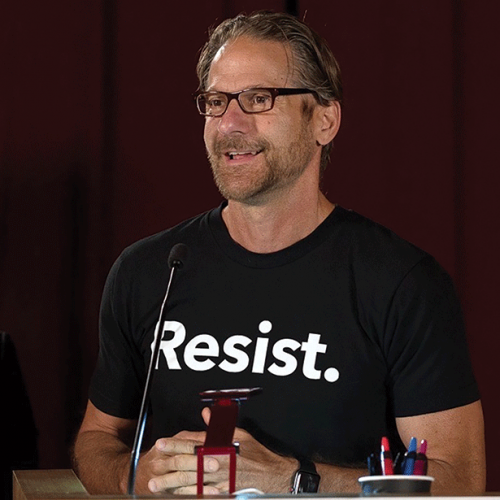 Few individuals have committed as many years to service for the city of West Hollywood as Councilman John D’Amico. Prior to joining the council in 2011, D’Amico was a member of various commissions and advisory boards the city dating back to the 1990s, including the Disability Advisory Board, the Human Services Commission and the Planning Commission. While D’Amico has not termed out and could have run for reelection to the City Council, he decided this year to step down.

“I genuinely believe that this city needs to be run by younger people who can bring to light the kind of world that they want to live in,” he said. “I got to get out of the way so that the next West Hollywood can emerge. Because it’s going to be more exciting and more connected to where we need Bringing West Hollywood into the modern age was a large part of the reason D’Amico ran first ran for council.

“[The council] got sort of wound in on itself,” he said. “And [the then-council members had] all been serving for a decade or longer. They were not that interested in public community input. I just thought, I need to get in there. The city had almost no public interface [when I joined the council]. I mean, that was sort of the third wave of the internet and still the city didn’t really have a website. It didn’t have a way to do any kind of business online. It didn’t have any way to contact residents other than sending them a piece of snail mail.”

D’Amico credits his colleagues Councilwoman Lindsey Horvath and Mayor Lauren Meister, who were elected to the council in 2015, with helping to usher expanded technology into the city’s infrastructure.

“Together, [Lindsey], Lauren and I brought some really kind of intense public scrutiny to our efforts,” he said. “The three of us … we were the ones that were doing all of it. And the other two Johns [Heilman and Duran] … basically didn’t have any time for resident input or problems, and it all went immediately to some staff person, which is a perfectly reasonable way to do it. But there was not any sort of real interface beyond the three of us to the residents.”

“I’ve known Councilmember D’Amico since the time he was appointed to [the] planning commission,” Meister said. “Having served the city in a variety of roles, he is certainly an example of why that experience is important – to be able to look at issues holistically is a valuable quality. Although I didn’t always agree with him, I always found his perspective on matters to be thought-provoking.”

Council John Erickson described D’Amico as a mentor and friend.

“He is someone that I have come to rely on for so many things that impact West Hollywood,” Erickson said. “Having known him since I was an intern at the city, then a staff member, planning commissioner and then councilmember, John has offered me much advice on city business and, more importantly, life as a gay man. John’s steadfast commission and fight to end HIV/AIDS while also reminding us of the importance of this work and the role West Hollywood has and is playing in ending this epidemic has forever changed my life. I have very fond memories of sitting next to him on the dais, and I will miss his physical presence, but I am so proud of his time in the city and forever thankful for his service to the city, our residents, businesses and so much else. His impact will continue to be felt for years to come, and what a legacy that is.”

D’Amico expressed pride over his most recent years on the council.

“I think in the last two years, this city finally reconnected with its roots about why we are a city,” he said. “We really looked at what it means to be in a public safety environment, we really looked at what it means for people to be able to live in the city, to have a living wage, what it means to think about transportation beyond just a big 2,500-pound automobile chugging down the street. We’ve made some big decisions about reclaiming these two square miles. And I think that’s extraordinary.”

D’Amico said that he intends to take a big step back in city service to allow for the next generation to forge the community of the future. He also already has a plan for what he’ll do after his last City Council meeting on Dec. 19, when the new council members are sworn in.

“I’m planning to go on a date with my husband on the 19th. We’re going to go have a nice dinner and celebrate another pivot in our life together of 30 years. He’s been incredibly supportive this entire time, from start to finish. I guess the day after, I’ll have a whole, whole lot fewer emails.”

For D’Amico, West Hollywood is special because it holds a place in the larger cultural conversation.

“I had this opportunity to introduce [U.S. Secretary of Transportation] Pete Buttigieg when he was in West Hollywood during his run for president. One of the themes of my service has been about how West Hollywood invents the culture that other cities consume. I wrote this introductory speech about how we in West Hollywood … invented a way to live in the world that was serious and committed and direct. And Petes and Chastens and Sues and Danas moved out of their small towns, and moved to West Hollywood in order to invent their lives. But somewhere along the way, the script flipped because of West Hollywood and things that we do. [Now, people don’t] have to leave their city in order to have a life. I think West Hollywood was part of that story. That you can be an elected official who’s gay and have a high profile and change the world.”to go.”