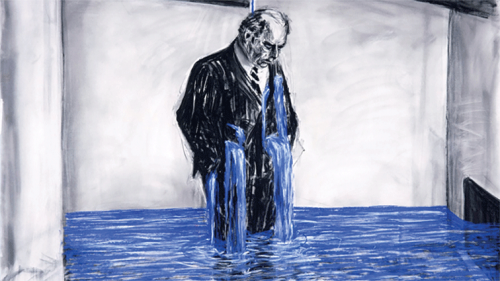 The Broad’s new powerful exhibition “William Kentridge: In Praise of Shadows” features more than 130 extraordinary works spanning 35 years of his artistic practice, including all 18 works from the Broad collection with substantial loans from across the United States and South Africa.

On view will be key drawings, sculptures, prints, tapestries, sets for theater and opera, as well as the artist’s 11 Drawings for Projection films and a series of films that reflect on early cinema. Many recent drawings will be shown that were created for his monumental performance project “The Head & the Load” (2018), which unearths the neglected histories of Africans and Africa in World War I.

The exhibition begins in the 1980s, when opposition to apartheid reached new heights in South Africa, and important early works rarely or never seen in the United States show Kentridge’s long-lasting political engagement, upholding artistry and the creative act as its own form of transformative knowledge.

For tickets and information, visit thebroad.org.

Empowering girls to be firefighters