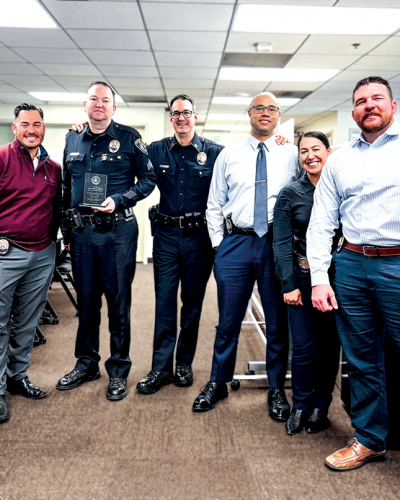 The investigators who oversaw the 2021 robbery investigation in Beverly Hills received awards for their meticulous work. (photo courtesy of the Beverly Hills Police Department)

Beverly Hills Police Department Detective Chris Coulter was one of the first officers on scene after a woman was shot during an armed robbery on the patio of Il Pastaio restaurant in March 2021.

On Nov. 16, Coulter and four of his colleagues received U.S. Attorney Agency Awards for their role in the investigation, which ultimately put three gang members behind bars.

Along with Coulter, Sgt. Eric Hyon, former Sgt. Kevin Burger, and FBI Special Agents Michael Fukuda and Chris McElroy were recognized by the U.S. Attorney’s Office. But the awards do not belong to them alone, Coulter said.

“[They belong] to our entire team because that case, and almost every case we work here, is complex,” Coulter said. “Those of us that are leading the investigation tend to get the accolades, but the award is really for the whole team and not any one individual. So I was happy for all of us.”

On March 4, 2021, Malik Lamont Powell, 21, and Khai McGhee, 18, robbed a man of a $500,000 Richard Mille watch on the crowded patio of the Cañon Drive restaurant. While one of the suspects struggled with the victim, a shot was fired, injuring a female patron. Powell and McGhee, members of the Rollin’ 30s Crips street gang, were sentenced to 12 years in prison in February. A third suspect, Marquise A. Gardon, also a Rollin’ 30s member, was sentenced to five years. He was the getaway driver, prosecutors said.

“Since we’ve had such a great result, we don’t foresee that collaboration between us and our fellow partners stopping anytime soon,” he said.

It is not uncommon for the FBI to assist police departments with high-profile crimes, and Coulter has worked with many federal agencies throughout his 25-year career, he said. The Los Angeles Police Department’s Gang Unit provided invaluable support in deciphering the suspects’ gang involvement, Coulter added.

The suspects in this case employed a unique level of sophistication in how they scouted potential victims, sending associates out on the streets to look for people wearing expensive wristwatches, he added.

While Coulter was surprised and happy to win the award, recognition is not why he has worked in law enforcement since 1997, he said. His love of the job comes from putting criminals in jail and keeping residents safe.

“It still feels good to … have people say thank you for solving a crime, whether it be something really minor like they got something stolen from their front yard or something more serious,” Coulter said.