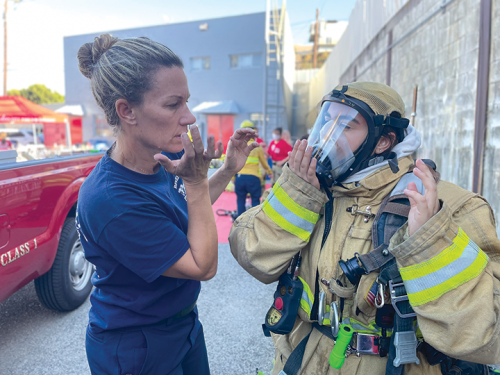 When Melissa Hillis became a firefighter in 1998, women were not as welcomed in the profession as they are today, she said. More than two decades later, firefighting is still dominated by men, and Hillis is one of only two women serving in the Beverly Hills Fire Department.

Hillis, an engineer who drives the city’s largest fire truck, has worked to increase the ranks of female firefighters throughout her career. At the BHFD Girls’ Empowerment Camp on Nov. 5-6, she will draw on years of experience to give young women a firefighting crash course and inspire them to follow their dreams.

“Many young girls don’t even know they can be a firefighter,” Hillis said. “A fire engine drives by and there are only men inside it. I want women to know that they too can be not only a firefighter, they can be anything they want in this world.”

During the camp, women and girls ages 14-21 will participate in a series of training sessions that give a broad overview of life on the job. They will command water hoses, learn about firefighting tools, climb a 100-foot ladder (while wearing safety harnesses), operate chainsaws, don the firefighters’ yellow coats, wear a self-controlled breathing apparatus and learn life-saving skills during CPR and EMS trainings, Hillis said.

They will also get a taste of life at the fire station, eating lunch with the firefighters on duty, as well as professional development opportunities, with Hillis organizing a mini-career fair as part of the camp, she said.

“It will be a really comprehensive look at the life of a firefighter, and an initial exposure to get them excited to want to learn more,” Hillis said.

Fire departments across the country have been slow to recruit more women, a trend that BHFD is trying to counter by doing outreach at high schools and colleges across greater Los Angeles and coordinating events like Hillis’ camp, Fire Chief Greg Barton said.

“This is a great opportunity for young women to see what the fire service is all about,” Barton said.

Hillis said 95% of paid firefighters are men, so it can be hard for aspiring female firefighters to find role models whose paths they can follow. Female empowerment is central to Hillis’ vision, and she has invited female cadets and explorers between the ages of 18 and 21 – women who are essentially interning at other fire departments – to join the participants, serving as mentors along the way.

Her goal is to replicate the relationship she formed some 20 years ago, when a fellow volleyball player named Kelly Morris changed her life. Morris, then a full-time nurse, was training to become a firefighter, and Hillis, a kinesiology student and aspiring sports coach, decided to follow suit. She fell in love with the job, and considers Morris a mentor to this day.

“It is important that young girls see women in these positions, because if they can see it, they can believe it and become it,” Hillis said.

Hillis planted the seeds for the camp about five years ago, when she began attending similar camps at other fire stations across Southern California to help burgeoning female firefighters and to see how the programs could be replicated in Beverly Hills, she said.

Neighboring departments have been running girls’ empowerment camps for years, but it was a challenge for Hillis to figure out how to safely execute such a program in Beverly Hills, where the drill yard is smaller and the department is short-staffed, Hillis said.

“Hillis has gone out and taken the best parts of these camps and brought them to Beverly Hills,” Barton said.

Hillis works 48 hour shifts with four days off, and organizing the camp – ordering equipment for the girls, preparing releases and waivers, communicating with parents – has added an extra 40 hours of work to her schedule, she said.

But her colleagues have stepped up to the plate as well, she said. Because of insufficient staffing, Hillis was worried that she wouldn’t be able to recruit enough firefighters to run the trainings. In the end, more firefighters offered to volunteer than she expected, including 15 women from neighboring stations.

During her years of visiting trainings throughout the region, Hillis was frequently reminded of how lucky she is to work in Beverly Hills, which is committed to diversifying the fire department, she said.

“This incredible camp … is exactly what is needed to show girls across our community and beyond that they can do anything and be anything they want to be,” Bosse said. “We want them to feel inspired, confident and ready to be our next generation of firefighters.”

While Hillis is excited to recruit more women to the fire service, she also wants to inspire girls with different aspirations, she said.

“I want them to know they’re capable of more than they think they are,” Hillis said. “Whether that has to do with becoming a firefighter or becoming an astronaut or becoming president of the United States, … I want them to leave here with confidence and self-esteem.”