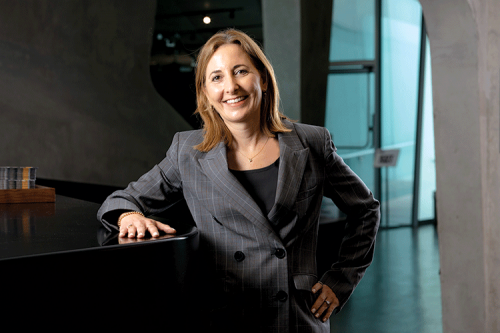 In 2019, photos of high school students in Newport Beach arrang­ing their solo cups in the shape of a swastika went viral. Holocaust Museum L.A. CEO Beth Kean invited the students to tour the museum, and quickly realized that their actions came from a place of ignorance, not hatred.

The experience underscored the importance of educating students about the Holocaust and other genocides. As one of nine leaders recently appointed to Gov. Gavin Newsom’s Council on Holocaust and Genocide Education, Kean is trying to improve genocide educa­tion across the state, ensuring the lessons of the Holocaust remain pertinent, even as it fades farther into the past and the number of sur­vivors continues to dwindle.

“The death camps didn’t just happen overnight. It’s really important that the way it’s being taught … makes it relevant to today, which means that the lesson plans are always changing,” Kean said.

With the council, Kean will assess the quality of Holocaust education across the state and implement strategies to improve it. From speaking to advocates across California, Kean knows that schools in certain parts of the state, particularly in the more remote regions in the northeast, lack the resources to effectively drive home the Holocaust’s lessons, including access to organizations like Holocaust Museum L.A.

The council has not yet met since she was appointed last month, but she said the first order of business will be to gather more precise data on how schools are performing.

“The governor’s council is a critical part of our state’s efforts to combat hate before it can arise through education and early intervention,” Attorney General Rob Bonta said.

To equalize the quality of genocide education across the state, money must be allocated for teachers to attend conferences and take their students on trips to educational organizations, Kean added.

But as the controversy in Newport Beach proved, affluence does not always guarantee a school is adequately prepared to teach about genocide, Kean said.

Equipping teachers with updated lesson plans and reading materials is one of the best ways to increase the quality of education, Kean said. She added that lesson plans are most effective when they are tailored to the demographics of the classroom and are connected to current events.

“Part of this is also having the tools to react in your classroom if you see acts of hatred, acts of discrimination, bigotry right before your eyes,” she added.

She also highlighted the importance of using primary resources and objects from the Holocaust, which have been proven to resonate deeply with students.

“When students come face to face with an artifact, that is life changing,” Kean said. “It just humanizes the history for the students, and makes it more relatable.”

Antisemitic incidents have been rising in recent years, reaching an all-time high of 2,717 in 2021, according to the Anti-Defamation League. Kean attributed the rise to a proliferation of influential figures making antisemitic remarks.

“I think that a Pandora’s box has been opened by people who have a lot of large platforms and are using their platforms to spew hate, and young people are picking up on that, and they don’t really understand these tropes that have been around for thousands of years,” Kean said.

After Kanye West went on a tirade against Jewish people last month that cost him lucrative partnerships and sent his net worth plummeting, a group of extremists hung a banner over a Los Angeles freeway praising his hate speech.

With better education, Kean is hopeful that such hatred can be quelled.

“We can make a difference, it’s just a matter of getting out there and using our voices collectively and being able to amplify our reach and impact,” Kean said. “That’s why I’m so proud to be on the council, and be part of this effort of eradicating hate in our state.”