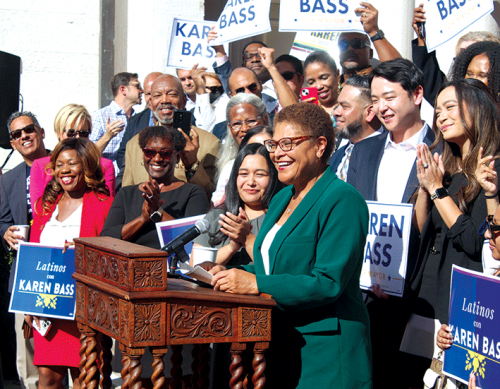 Flanked by supporters, Bass delivered a short speech thanking voters and outlining her plan as mayor.

“My pledge to you is that I will hit the ground running on Day One,” Bass said. “Los Angeles is the greatest city on Earth, and I know if we come together, if we hold each other accountable, if we focus on the best of who we are, we will create better neighborhoods today and a better future for our children.”

Bass acknowledged the challenges she faces, promising to fight rising homelessness, soaring rents and other conditions that have hurt many Angelenos’ quality of life. She said it is unacceptable that many residents work more than one job to survive, and would advocate for union jobs and higher salaries.

“Tonight, 40,000 Angelenos will sleep without a home, and five might not wake up. Many Angelenos do not feel safe in their neighborhoods, and families have been priced out of their communities,” Bass said.

She added that she will declare a state of emergency on her first day in office, identifying areas to build housing and rolling out an overarching plan to combat the homelessness crisis. Bass also said she wants to include faith-based organizations and established nonprofits in her fight against homelessness.

A former nurse and community organizer who was elected to the House of Representatives in 2016, Bass said she would approach the role of mayor by building coalitions to get things done.

The mayor-elect appealed to Caruso voters, welcoming them “in every aspect of my administration,” and said that she hopes to work with her former opponent.

Bass did not announce any members of her transition team, and said she would continue shaping her administration after being sworn in on Dec. 12.

The first woman and the second Black person elected mayor of Los Angeles, Bass is still processing the historical significance of her win, she said.

“When you do make history … you have extra responsibility, you always have to make sure that you maintain excellence in every step of the way,” Bass said. “But when you’re thinking about that, you have to think that the path that you go is laying the foundation for those who come behind you.”

‘Deck the Hall’ with the LA Phil