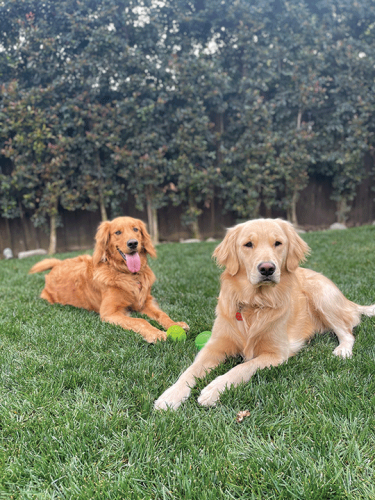 West Hollywood will offer a new space for Nala and Lucy when an offleash dog park opens at Plummer Park. (photo by Emily Jilg)

“Our city’s dog owners and visitors with dogs will be able to have a lovely small and large dog park on the east side,” Mayor Pro Tempore Sepi Shyne said. “West Hollywood has more dogs per square mile than most cities, so bringing accessibility to the east side for our pet owners was essential.”

In January 2021, the council first directed city staff to explore the implementation of such a program as a preamble to a larger conversation about the city’s long-range plans for Plummer Park.

“The dog park is really important to the east side members, because many of them have to trek all the way over to the west side to use [West Hollywood Park] when we all know people love taking their four-legged companions to Plummer Park to have a lot of fun,” Councilman John Erickson said.

City staff suggested putting forward $325,000 from unallocated reserves in the general fund for the design and construction, as well as the routine maintenance of the area. The site will be at a location adjacent to Vista Street, near the tennis courts.

“Another dog park – wagging tails for years and years,” Councilman John D’Amico said. “We know our other dog parks are hugely popular. This one will no doubt also be a hit.”

The pilot project will include two separate areas, one for larger dogs and another for small dogs, which will be separated by a fence. A fully accessible sloped walkway will replace the current, non-ADA compliant ramp to the tennis courts, as well. A new tree will also be planted along the perimeter for shade, and there will be a dual species water fountain within each off-leash area. Pet waste stations and seating areas will also be provided.

One alteration the council made to the staff recommendations was approving the installation of artificial turf in the area, versus the initially less expensive suggestion of wood chips. While the move will cost roughly an additional $200,000, Erickson said it was a “long-term investment.” “Why would we spend a significant amount of money to install [the wood chips] to only rip it out again [to install artificial turf]?” Erickson said.

With design and installation yet to come, staff estimated it would take between nine months and a year before the off-leash area is open.

“We don’t have pet owners – we have animal guardians in West Hollywood,” Councilwoman Lindsey Horvath said. “As an animal guardian myself, I’m thrilled that there will be yet another resource for my little Winston and all the pups in the neighborhood to enjoy. I’m glad the council also decided to invest in some additional measures – turf and shade chief among them – to make the experience of using the off-leash area more enjoyable.”

“The Plummer Park off-leash area is good news for our city’s pet owners,” Mayor Lauren Meister said. “Many of our east side residents live in apartments. For many, Plummer Park is their back yard. Dogs need a place to run, play and socialize. The new off-leash areas in Plummer Park will be a great amenity.”

Do the seasons make me wistful? Naaaw.