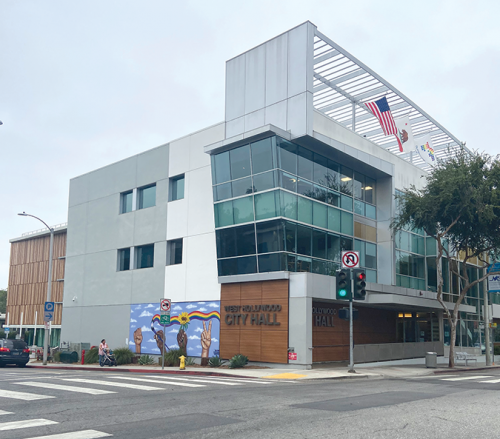 On March 1, 2023, West Hollywood will end the COVID-19-related rent freeze, which by that time will have been in effect for nearly three years. Additionally, the city will cap rent increases after that date at 3% citywide.

“The rent is too damn high,” Councilman John Erickson said. “Renters are 80% of our city, and we need to ensure that everyone has a place to live, and that with record inflation, the improvements that are needed on buildings aren’t going on the backs of renters, when landlords and other people haven’t improved their homes or their properties for decades.”

While the item had unanimous support from the City Council at the Oct. 17 meeting, several building owners appeared during public comment to voice concerns about the rent cap.

“I don’t have dozens of units and, in fact, my family only [has] four units,” landlord Mary Grover said. “Our family moved here when the town was not West Hollywood, it was Sherman, and my grandfather … built four units … in 1906.”

Grover went on to explain how little return she and her brother, the co-owner of the building, have received because of inflation.

“My brother is 80 years old. I’m no spring chicken. And we were hoping we could use this money for our retirement years. But we can’t. If you’ve ever seen our property, you’ll see it’s pristine, and it takes a lot of money and a lot of time to do that to keep our tenants happy and safe. But with the rent cap, we can’t do that very well,” she added.

Max Sherman, of the Apartment Association of Greater Los Angeles, said that the March end date for the rent freeze is out of step with the rest of the county.

“While we appreciate the establishment of a clear end date for the moratorium, we ask why this emergency measure is not ending this year, as nearly all other jurisdictions, including Los Angeles County, have done,” Sherman, said. “And just as the clear end of the moratorium is being defined, the council now considering limiting all future rent increases permanently to a maximum of 3%, which is less than half of what the current RSO formula allows. As you heard from earlier public comments, how are mom-and-pop small business owners already on the verge of selling or losing their property expected to remain in business or properly maintain a building?”

“We hope you look at it from the point of view of people that aren’t multimillionaires, they’re scraping to get by on both sides of the fence – both the landlords and the tenants,” Grover said. “There are two sides to the story.”

Other residents, however, voiced what they see as the importance of implementing rent control.

“I want to remind all of us that West Hollywood was established as a city because of rent being out of line,” longtime city resident Esther Baum said. “[A] 6% increase in rent for seniors is unacceptable. 90% of them would be on the street homeless because they could not pay that large increase. I think having 3% as a maximum is fair.”

Rent stabilization is an issue on which the council, and many currently running for city council, stand united. Each of the City Council members expressed their support of the item.

“People are struggling to keep up with the high cost of rent and cost of living,” said Councilwoman Lindsey Horvath, who is also running for Los Angeles County supervisor. “Instituting a 3% rent increase limit will help to ensure that people who are finding a way to afford where they live have a fighting chance at staying housed.”

“Given the rising costs of living and inflation, it was essential for us to protect renters while also giving landlords a fair increase,” Mayor Pro Tempore Sepi Shyne said.

“It’s important for our residents to know that they can count on rent increases that will not put their home rental costs out of reach, and force them to move,” Councilman John D’Amico said. “A 3% maximum adjustment is a generous amount based on an understanding that the fixed costs of property ownership (loans) do not rise and fall with inflation. The council also pointed out ways that landlords could get assistance from local and state government.”

“We will continue helping landlords make sure that the resources available to them and to their tenants to keep people housed – assistance from the state, our city’s ongoing rental assistance program, Section 8 vouchers and other options – are accessible and delivering the relief that’s intended,” Horvath said.

Mayor Lauren Meister was the lone no vote.

Also discussed during the meeting was a pending study conducted by city staff that will analyze the long-term impact of future developments.

“In addition, I didn’t need a study to tell me that designating all replacement units as affordable, vs. rent-stabilized, would disincentivize certain types of projects. The purpose of this state legislation was clearly to protect existing, rent-stabilized housing that is affordable, so that renters paying affordable rents could remain in their homes. The bottom line is protecting our existing rent-stabilized units and the residents who live in those units. If they are ‘Ellis’d out’ (referring to the Ellis Act) of their building, they will have a very difficult time finding another unit in West Hollywood that they can afford. Preventing displacement of existing tenants should be just as important as building new units, if not, more so,” Meister said.

“We have to make sure that we provide housing of all types to meet the housing crisis we face.  It’s no secret that people are struggling to afford their rent – even people who have good paying jobs. I’m glad to see that the council decided to take a step towards ensuring affordability while we gather more information about potential impacts on our prospective housing stock,” Horvath said.

“I think we did a good job of finding the right next step with respect to how to manage our existing housing stock while allowing opportunities for development in our neighborhoods,” D’Amico said.

Horvath drew the connection between new low-income units and the new rent cap.

“The West Hollywood City Council is exploring every option we have to keep and create more affordable housing options in our community. Rather than mandates from Sacramento, we need more resources to deliver the solutions we know can work in our neighborhoods. We know how to get the job done locally,” Horvath said.

“All of our housing from the very low-income affordable units to the $25 million penthouse condos, exist along a continuum, and our city is committed to having a vibrant mix of housing types and incomes,” D’Amico said.

BHUSD Board candidates make their pitches