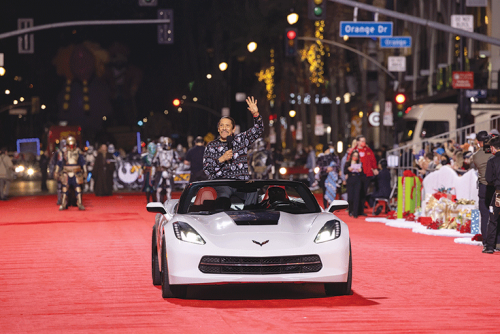 Danny Trejo will be the Grand Marshal for the 90th anniversary of the Hollywood Christmas Parade on Sunday, Nov. 27 at 6 p.m. The event supports Marine Toys for Tots, which is celebrating its 75th anniversary.

“Wow! I’m honored to represent Los Angeles,” Trejo said “As a kid growing up in the San Fernando Valley, I never would’ve imagined I’d be the grand marshal of the Hollywood Christmas Parade. Then and now I still love cruising the streets of Hollywood. What an unbelievable honor.”

“We are thrilled to be partnering with the Hollywood Christmas Parade for our 75th anniversary, as it is right here in Los Angeles, where we began our operation years ago,” Lieutenant General James B. Laster, president and CEO of Marine Toys for Tots said. “We are proud to continue our mission of bringing much needed holidays gifts and cheer to those less fortunate.”

Grandstand seats are now on sale. For information, visit hollywoodchristmasparade.org.