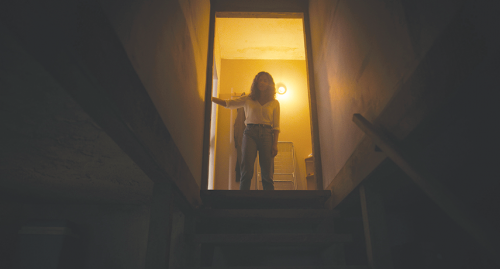 Georgina Campbell stars as Tess in “Barbarian,” which offers some of the best jump scares this year. (photo courtesy of 20th Century Studios)

So 2022 won’t go down as the best year for horror fans, but it’s hardly without a whole lotta options. To start the season right, enjoy the Halloween season’s best TV and film options that dropped this year.

These two don’t have much conceptually in common, but they offer the year’s top jump scares. If only those scares were wrapped in less clunky packages, more interested in rhetorical points than narrative cohesion. “Barbarian” loses steam after the first hour, while “Smile” falls apart in the last 15 minutes. Regardless, they bring the popcorn goods.

Jordan Peele’s “Get Out” and “Us” are master classes in the genre, brimming with complex symbolism and biting commentary. The junior director’s sci-fi foray, however, doesn’t hit with the same impact. Still, a few haunting moments (that stinkin’ chimpanzee) and Keke Palmer’s knockout performance compensate.

Plenty of final girls often face their monsters alone, surrounded by folks who don’t believe their hysterical pleas for help. This IFC flick filmed in Romania tops the gaslighting options. Every vocalized concern from Julia (Maika Monroe from “It Follows”) meets resistance: a doubting husband, annoyed neighbors, police accusing her of violations. It’s a slow, frustrating endeavor with a solid conclusion, complete with a clear middle finger to mediocre men who believe they know better.

Neve Campbell’s Sidney and the gang are back in the fifth meta-slasher “Scream.” As usual, the formula is all about the horror formula. Sadly, this marks a major shift as the first one without Wes Craven at the helm. Luckily, the new blood do him proud. Pacing, mystery and all those winks and nods to the genre’s great history work so well. Too bad the higher ups couldn’t figure out how to hold onto their star, thus losing Campbell for a forthcoming sixth installment.

Mike Flanagan is easily one of the best modern horror minds, and his fourth Netflix series, “The Midnight Club,” diversifies his resume with this teen-scare romp. At a special mansion, teens with terminal diagnoses prepare to cross over, passing the time at night by telling scary stories that all enjoy a degree of truth.

The residence’s complicated history also invites plenty of paranormal happenings that all build to something major after 10 episodes. It’s easier viewing than most options here, packed full of great characters and decorative thrills.

Quick rant: Scott Derrickson’s exit from the “Doctor Strange” sequel clearly hurt what should’ve been a scarier, crisper super-sorcerer romp. Whelp, their loss is Blumhouse Productions’ gain with this supernatural child-abduction thriller. Set in the 1970s, this one’s a brutal look at latchkey kids and one particular serial killer, played by a masked Ethan Hawke, who takes advantage. At least some ghost kids are there to help.

How did the producers of CBS legal drama “The Good Wife” fancy a supernatural “X-Files” show? Not sure, but season three is a great ride. A priest who has cryptic visions, a lapsed Catholic forensic psychologist and an atheist tech expert attempt to prove or disprove paranormal events, but a brewing global conspiracy disrupts business as usual. It’s an addicting binge with more in the works.

Marvel Studios’ Halloween special is the closest the entire franchise comes to R-rated content. Gael García Bernal plays monster hunter Jack Russell (a hilarious name once you watch the whole thing) , who is invited to honor the death of a legend. Unfolding events reveal a darker secret and plenty of twists.

Perhaps the two most shocking bits though: it’s actually rather violent, especially for a Marvel special on Disney+, and the director is actually an Oscar-winning composer (think “Up,” “Inside Out,” “Rogue One”) successfully overseeing his biggest project to date, and still composing too, of course. It’s a brilliant experience, full of action and suspense, told in vintage black-and-white with a voiceover that channels Vincent Price.

From care for authentic representation to insane monster design, this “Predator” origin story is still the best thing to happen to horror this year. Rather than settle for run-of-the-mill, the usual for too many previous films here, “Prey” presents a complex period piece with plenty to say about American history, along with some marvelous action and intense settings.