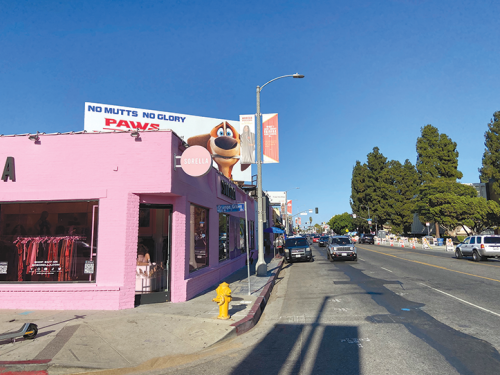 One of the suspects arrested for robbery was allegedly involved in a hold-up on Melrose Avenue. (photo by Edwin Folven)

The Los Angeles Police Department’s Follow-Home Robbery Task Force has been making progress in solving crimes and reversing a violent trend occurring since late last year throughout the city.

Capt. Jonathan L. Tippet, commanding officer of the LAPD’s Robbery-Homicide Division, outlined the progress on Oct. 4 during a virtual meeting of the Los Angeles Board of Police Commissioners. Tippet said the 28-member task force was formed last December in response to a series of follow-home robberies that occurred last fall, and as of Sept. 30, has investigated 308 incidents resulting in 113 arrests. The robberies are being committed by members of multiple gangs who target victims wearing expensive watches and jewelry, and carrying luxury handbags, he said. Many victims have been followed after leaving stores, restaurants and nightclubs in the Hollywood and Wilshire divisions, as well as downtown. Sixty-eight of the robberies occurred in Hollywood and 66 happened in the Wilshire Division. Detectives have determined that members from 22 different gangs have been involved in the robberies, and some have come from as far as Oakland.

“Previously, we preferred to identify all involved before taking down crews. Due to the crisis, we began making arrests as quickly as possible once individuals were identified, and we began working our cases differently, gathering additional intel and evidence from warrants and interviews with those individuals that were arrested,” Tippet said. “This has proven to reduce the number of incidents and disrupt the crews that were coordinating these takedowns. We went from a high of 39 for the month of November (2021) prior to the implementation of task force, to 15 last month in September. The numbers fluctuate monthly. However, over the last four month period, the average is approximately 13 incidents a month.”

Tippet said some crews and individual suspects have committed multiple robberies. As an example, he cited the arrest of a suspect from Oakland – Eric Watts, 31 – who was taken into custody on Sept. 7 in the city of Martinez in the Bay Area. Watts was allegedly involved in a robbery on May 24 in which the victims were followed from a restaurant on Third Street in the Beverly Grove area, and a July 5 robbery near Melrose and Orange Grove avenue that resulted in an officer-involved shooting, as well as crimes in other parts of the city.

“We have linked this individual to five violent follow-home robberies in the city of L.A. so far,” Tippet added.

Authorities said the robberies do not always involve people being followed. Sometimes, the suspects wait outside stores or pose as customers inside, searching for people wearing expensive jewelry. Some of the robberies, including the July 5 hold-up on Melrose Avenue, were committed while the victim was inside or exiting the store.

Police said the suspects often shoot or injure victims, and people are advised to comply and give their property when confronted. Shots have been fired in 32 of the follow-home robberies, 28 people have been struck by gunfire and two have died.

“These robberies are serious, violent and have resulted in death. There are those situations where they’re pointing handguns at people and demanding property, but I would say a huge portion of these robberies involve individuals that have no opportunity to comply, really haven’t been asked any questions or anything like that,” Tippet said. “They’re just being taken down. That’s an M.O. that these crews have had just to disable a victim and then take their property from them.”

Tippet said the task force will continue operations into the holiday season to ensure safety around restaurants, shopping malls and shopping districts. It will involve the use of uniformed officers as well as undercover personnel and specialized patrols.

LAPD Chief Michel Moore praised the task force and said the focus will remain on reducing violent crimes such as follow-home robberies. He added that the Los Angeles County District Attorney’s Office has begun more frequently filing enhancement charges when suspects use guns that keep repeat offenders in jail instead of releasing them into the community where they commit additional crimes.

“This was a phenomenon that just a few short years ago was something that was folklore of our past, was something that happened decades ago as far as individuals being targeted for this type of high-end jewelry or purses or so forth. Our intention is to get back to that,” Moore said. “These are 300 instances in a city of 4 million, and yet, the striking impact it has on the sense of safety is why it is so critical that we changed the course of this. We are committed to working with all our criminal justice partners to see that we change that course going forward.”