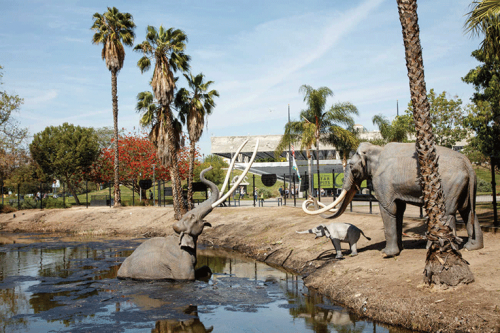 View of the mammoth sculptures in the Lake Pit, part of the grounds of the La Brea Tar Pits.
(photo courtesy of the Natural History Museums of Los Angeles County)

Following the September 2022 announcement that the La Brea Tar Pits, part of the Natural History Museums of Los Angeles County, was selected as one of The First 100 IUGS Geological Heritage Sites, the International Union of Geological Sciences announced the full list of 100 sites during its 60th Anniversary conference in Zumaia, Basque Coast, Spain, at the UNESCO Global Geopark. A new designation similar to UNESCO’s World Heritage Sites, IUGS Geological Heritage Sites are key places with geological elements and/or processes of international scientific relevance and those that represent a substantial contribution to the development of geological sciences through history and understanding of the Earth.

The only Geosite in an urban area, La Brea Tar Pits has been identified by the International Union of Geological Sciences as the richest Pleistocene (“Ice Age”) fossil site on earth, and as the key paleontological site that has shaped the understanding of climate change for both scientists and the public.

IUGS is one of the World’s largest scientific organizations with 121 national members representing over a million geoscientists. The presentation of the First 100 IUG Geological Heritage Sites kicks off an endeavor to designate geological sites from around the world that are iconic, recognized by all of the geoscience community for their impact in understanding the Earth and its history. Only eight sites were selected in the United States.

“This designation from the international scientific community significantly reinforces the unique importance of the La Brea Tar Pits site for scientific research into the past for understanding climate change in our own time,” said Dr. Lori Bettison-Varga, president and director of the Natural History Museums of Los Angeles County, which oversees La Brea Tar Pits as an active field site and museum.

“This designation is especially timely considering our upcoming museum reimagining and renovation, which will help our organization better share the sites’ critical research with the public.”

Immaculate Heart students ‘walk’ in support of the school