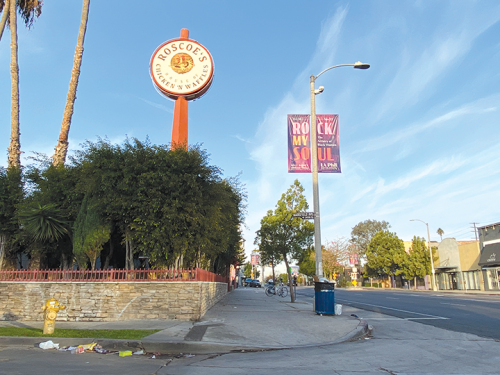 The robbery occurred in a parking lot of a restaurant at Pico Boulevard and Mansfield Avenue, police said. (photo by Edwin Folven)

Investigators with the Los Angeles Police Department’s Follow-Home Robbery Task Force are seeking six suspects who committed an armed robbery on Oct. 22 in a parking lot in the 5000 block of Pico Boulevard.

The robbery occurred at approximately 2:20 p.m. as two victims were in a parking lot for the Roscoe’s Chicken and Waffles restaurant at Pico Boulevard and Mansfield Avenue. The six suspects, who were wearing masks and were armed with handguns, approached the victims and demanded jewelry and handbags, police said. The victims complied and no injuries were reported. The suspects fled in a Dodge Durango and Maserati SUV, said Lt. Kirk Kelley, with the LAPD’s Robbery-Homicide Division.

“It’s an active investigation. We are working on it,” Kelley added. “We took the case because it fits the M.O. We are still looking into whether they were followed to the location.”

Kelley said he did not know where the victims were prior to the robbery, and police do not believe there was any connection to the restaurant. The lieutenant added that it does not appear the victims had alerted anyone about their whereabouts on social media. In some previous robberies investigated by the task force, the suspects targeted victims after they posted on social media they were at a particular location.

The robbery occurred at a time when the restaurant was open and many people were in the area. Kelley asked anyone with information to call detectives at (213)486-6840. During weekends and off-hours, call (877)LAPD247 and (877)ASKLAPD.