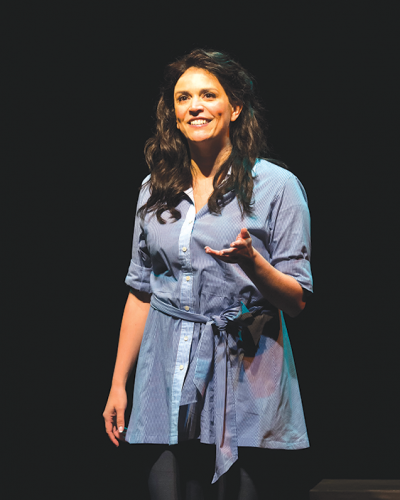 Cecily Strong appears in “The Search for Signs of Intelligent Life in the Universe” through Oct. 23 at the Mark Taper Forum. (by Craig Schwartz Photography)

Cecily Strong has been an MVP on “Saturday Night Live” since 2012, and when she resumes appearances later this season, she will become the longest-running female cast member in the series’ history. She is known for celebrity impressions, particularly her dead-on, portrayals of Judge Jeanine Pirro, Melania Trump and Dianne Feinstein.

I’m partial to a moment a few seasons ago when she nailed Catherine Deneuve in a hilarious “Weekend Update” sketch, but I digress. Put simply, her character versatility has been one of the main reasons the show has kept working over the last decade. It is no surprise that she would take on a multi-personality one-woman show.

“The Search for Signs of Intelligent Life in the Universe” is one of Lily Tomlin’s crowning achievements. A popular 1985 Broadway play, Tomlin won a Tony for her performance. Written by her now-wife Jane Wagner, the show follows a series of characters, all of whom come together under a bag lady who’s been tapped by the aliens to help study the human race. Most of the play appears disconnected until the second half, when the convergence of the various characters crystalizes a universal message of the interconnectedness of all beings … at least that’s what I got out of it.

Strong has a tall assignment, taking on not just a performance that is something of a theatrical legend, but one that was preserved on film and is readily available to view today. It’s on YouTube as of this writing, actually. Tomlin, of course, has also enjoyed a recent career resurgence, with the popularity of her Netflix sitcom “Grace and Frankie,” co-starring Jane Fonda, and two movies currently in production. A making-of documentary of her 1980 classic “9 to 5” just hit theaters, too. Not to mention Tomlin’s consistent pop culture wins over the years, starting with “Laugh-In” and continuing with her Oscar-nominated turn in “Nashville,” her voice work on “The Magic School Bus” and appearances in everything from “The West Wing” to “Desperate Housewives.” Next to that Tony, she’s got a lot of hardware, including a few Emmys and a Grammy.

Any role that Tomlin takes on, especially when it is really multiple roles, is something only an extremely talented, versatile performer can embody.

That’s where Strong steps in.

Put simply, she’s a revelation. Yes, “SNL” fans will see plenty of hints of some of the characters she’s played in a sketch or two, but they will also see new depths to her abilities, the kind of depths that can only be achieved when brilliant writing meets a brilliant performer.

The play has been updated for the modern era, with the “bag lady” guide (Trudy) making references to “the cloud” and a few other terms that didn’t exist in the 1980s. The main characters, though, intersect over a period that seems to last 10-15 years, with Trudy dipping into the lives of people during and after the women’s movement of the early-1970s.

Strong originally performed the play at The Shed in New York earlier this year, but the messaging surrounding the women’s movement most certainly plays differently now, with this summer’s Supreme Court decision overturning Roe v. Wade providing new layers to Wagner’s commentary on the way women attempting to “have it all” are treated by society (read: men).

Wagner doesn’t dwell in any of these points. Her writing has no intention to beat you over the head with a message. By establishing early-on that we are going to shift through a scattershot of people, her writing conditions us to comprehend a point as its presented to us. When we get to the close, when the whole thing “kind of” makes sense, Wagner allows the audience to sit just long enough with an infinite feeling of possibility. Cut to black, take a bow.

In a divided world, too, this play feels particularly poignant. The entire idea that, deep down, all human beings are essentially the same is something lost on all of us at one point or another, as we attempt to navigate an endless series of hurdles on our way to paychecks or offhand chuckles. Wagner’s work argues that the zin is found in the tissue that bonds the hustle and bustle, and that despite our many shapes, faces, feelings and sizes, we are all the same – combined in this case in the form of one singular performer. In many ways, this message might make this the ultimate one-person show.

And let’s not understate how absolutely hilarious the show is. All of Trudy’s big human takeaways she learns she writes on post-it notes, which line the interior of her heavy trench coat. The observations she lists, all true, all hilarious observations on the human condition. And Strong’s “SNL” creditionals allow her to find the humor in every single one of her characters.

On a stage with minimal props or set design, the excellent writing still lives and dies with Strong, and it is her compelling, intuitive delivery that makes it all work. You laugh, you might even cry, but in the end, you’ll leave just a little bit changed.

“The Search for Signs of Intelligent Life in the Universe” is playing at the Mark Taper Forum at the Music Center through Oct. 23. The Music Center is located 135 N. Grand Ave. For tickets and information, visit www.centertheatregroup.org/tickets.

LAUSD to increase greenspace on campuses