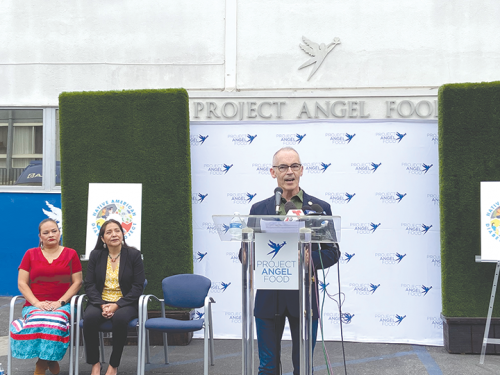 Project Angel Food, a Hollywood-based nonprofit that delivers meals countywide to people with debilitating illnesses, is seeking more participants for a program launched in 2020 to reduce diabetes in the Native American community.

Project Angel Food CEO Richard Ayoub joined Los Angeles City Councilman Mitch O’Farrell and Dr. Claradina Soto on Oct. 10 to announce that the study has already shown positive results in reducing diabetes, and encourage more members of the Native American community to join the program. They came together at Project Angel Food’s headquarters at 922 Vine St. on Indigenous Peoples Day, which is observed annually on the second Monday in October in Los Angeles.

“Two years ago on [Indigenous Peoples Day], Project Angel Food announced our Native American Diabetes Project with USC Keck School of Medicine, and now we’re excited to announce some early results of that study,” Ayoub said. “We hope to have 150 participants. So far, we have 38, and we have incredible results.”

Soto, an associate professor at USC Keck School of Medicine and head researcher of the Native American Diabetes project, said the initiative demonstrates how health outcomes and the mental wellbeing of Indigenous people with diabetes can be dramatically improved by providing access to nutritious meals. The program provides medically-tailored meals to people of Native American descent, and has been shown to reduce A1C levels in people with diabetes. A1C tests measure average blood sugar levels and are commonly used to diagnose type 1 and type 2 diabetes. During the initial two years of the study, participants collectively reduced A1C levels by 57%. The individual reductions ranged from -0.1% to -2.4%.

“We are addressing the needs and the gaps here with culturally-relevant programs to meet the needs of our native communities,” Soto said. “Our goal is to reduce A1C levels [and] we’ve done that by 57%, reducing their [individual] A1C levels by as much as 2.4%.”

Participants in the program receive one delivery per week of medically-tailored frozen meals providing balanced nutrition for seven days. Soto added that an important component of the program is a buddy system that offers social interaction. Participants also take online classes with information on eating nutritious foods and maintaining a healthy lifestyle.

“Anecdotally, participants have expressed feelings of social connectedness after participating in our program. And this is really important, as our community really needs that connectedness with each other and one another,” Soto added.

O’Farrell, 13th District, is a member of the Wyandotte Nation and first Native American to serve on the Los Angeles City Council. He said health disparities among Native Americans have been prevalent for decades.

“It is important on Indigenous Peoples Day, as we reconcile atrocities of our nation’s past, that we honor the work of Project Angel Food, Dr. Soto with the Keck School of Medicine [and] the Native American Diabetes Project, because it moves us forward in helping reclaim the health of Native Americans, which was stolen in what could only be called a genocide lasting hundreds of years,” O’Farrell said. “This program, along with Project Angel Food … really means everything to Native Americans and Indigenous communities that suffer from the worst health outcomes of any demographic group in the United States, whether it’s diabetes, whether it’s infant mortality, early death [or] a much shorter lifespan.”

“One of the biggest obstacles to health improvement is access to healthy meals, healthy food, access to healthy vegetables,” Soto added. “That’s why Project Angel Food is so pivotal in this work that we’re doing to be able to provide those healthy nutritional meals for these individuals as they want to really work towards reducing their diabetes.”