Peter Edwards and Oleta Haffner were selected by the Academy as the participants for the Jonas Gwangwa Music Composition Initiative. 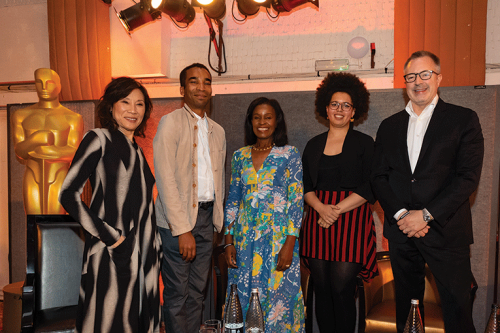 Peter Edwards and Oleta Haffner were selected by the Academy as the participants for the Jonas Gwangwa Music Composition Initiative. (photo courtesy of the Academy Museum of Motion Picture Arts and Sciences)

“We are so honored to have Peter and Oleta, two incredibly talented composers, participate in this program, through which we seek to provide the connections, tools and opportunities needed to expand access to the global film industry,” Academy executive vice president, Impact and Inclusion Jeanell English said. “We also thank Mercury Studios and all of our partners for making this program possible.”

“Talent discovery and development is at the heart of what we do at Mercury Studios so we are looking forward to working with Peter and Oleta over the next year,” said Mercury Studios co-president Marc Robinson. “We hope this initiative will only expand as we continue to create ways to engage composers around the world.”

Edwards is a composer, musical director and pianist who has been working in the London jazz scene for 12 years, and Haffner is a London-based composer who writes music for animated short films and theater productions. Throughout the year, they will receive access to Academy members across various branches in order to gain an understanding of the filmmaking process; one-onone mentorship with a member of the Academy’s Music Branch to learn about the practical aspects of composing for film; access to Academy events and screenings in London; and introductions to leading practitioners from all areas of film music, among other mentorship programming. They also will be matched with a filmmaker who is in the process of making a short film and will be given the opportunity to compose music for the film. The composition work will be funded by two grants from Universal Music Group’s Decca Records and Mercury Studios, a full-service, global production film and television studio. Additional programming and support will be provided by UMG’s Abbey Road Studios.

Gwangwa, who died in 2021, was a prominent South African jazz musician and composer. He received Oscar nominations for Original Score and Original Song for his work with George Fenton on “Cry Freedom” (1987). For information on the Jonas Gwangwa Music Composition Initiative, visit oscars.org/learn/ jonas-gwangwa-initiative.