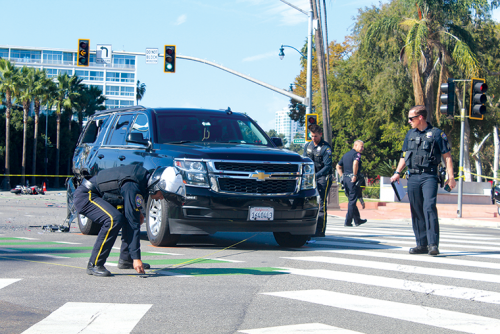 A motorcyclist died following a a collision with an SUV in the intersection of Santa Monica and Wilshire boulevards on Oct. 26, Beverly Hills Police Department Lt. Giovanni Trejo said.

Police were dispatched to the scene at 10:04 a.m., along with Beverly Hills Fire Department paramedics who treated the motorcyclist before transporting him to a hospital where he died, Trejo said. The driver of the SUV stayed at the scene and is cooperating with police, though it is not yet determined to be a criminal investigation, Trejo said.

He added that there were several occupants in the SUV, all of whom were uninjured.

The intersection was still closed at 11:15 a.m., with BHPD officers and security guards at the scene. Witnesses or anyone with information is urged to call BHPD at (310)550-4951.

Kids delight at ‘Boo at the zoo’ through Oct. 31