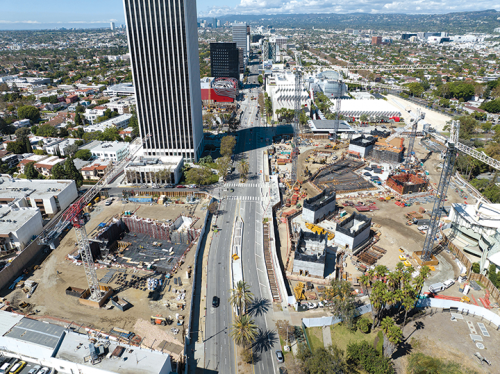 The museum project, which began in 2020, is 50% complete. The new building is expected to open in late 2024. (photo by Gary Leonard © Museum Associates/LACMA)

Since construction started in 2020, crews have installed 1,500 foundation piles and seismic base isolators, and have built foundations, basements and above-grade walls and decks. Temporary falsework will be installed this fall to support construction of the portion of the building spanning Wilshire Boulevard. The project is anticipated to be complete in late 2024.

The museum also announced that the capital campaign for the project has reached $700 million of its $750 million goal. Los Angeles County’s contribution toward the building was $125 million, with the balance of funds coming from private sources. Under a public-private partnership, the new county-owned museum building will be 80% funded by private donations.

“I am deeply grateful to our board and generous base of public and private donors who have brought us to more than 90% of our fundraising goal and continue to drive us forward in our campaign,” LACMA CEO and Wallis Annenberg Director Michael Govan said. “This milestone could be achieved only because so many people have come together to build the future of the museum, Los Angeles and the greater region. I’m particularly happy that the quality of vertical concrete walls poured thus far have met or exceeded the expectations of architect Peter Zumthor. And with construction now moving past the halfway mark, we can start to see the great contribution Zumthor has made with his design for the David Geffen Galleries.”

In 2020, LACMA commissioned a Los Angeles County Economic Development Corporation report to assess the economic impact of the new building project, which includes construction of the David Geffen Galleries and 3.5-acres of new public outdoor space. According to the report, the project will generate more than $1.2 billion in economic output and $698 million in value for the Los Angeles County. It will also create 9,370 jobs, including many in the construction and professional services industries, whose labor income is estimated to be $674 million, the report stated. The project is projected to generate approximately $182 million in local, state and federal taxes.

“Reaching $700 million is a huge sign of the importance of this civic initiative,” LACMA board co-chair Tony P. Ressler said. “We appreciate both our county and city leaders who have been unfailing in their support for the project, as well as the many private individuals and foundations, LACMA’s board and Mr. David Geffen especially, that have contributed through their philanthropy to make this project one of the most successful public-private partnerships in L.A. history. We’re thrilled to see LACMA’s newest masterpiece take shape on Wilshire Boulevard.”

“The remarkable generosity and commitment to this project from all of our supporters is a testament to the vital importance of LACMA for Los Angeles and its future,” LACMA board co-chair Elaine Wynn, said. “Reaching these milestones further confirms how deeply mindful we are as stewards of the public and private funds entrusted to us. We are grateful to each individual who has contributed to building LACMA, as well as the county for helping us realize our vision of a museum for everyone.”