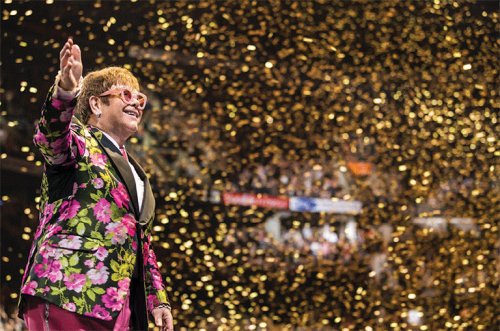 Co-chaired by LACMA trustee Eva Chow and actor Leonardo DiCaprio, the celebration of art and film will take place at the museum. During cocktails, guests will enjoy a DJ performance by award-winning artist, photographer and producer Derrick “D-Nice” Jones. Gucci continues as the presenting sponsor of the annual event which is also supported by Audi.

“The Art+Film Gala has showcased many incredibly talented musicians over the years, and to have an icon like Elton on stage this year is beyond exciting,” Chow said. “He’s such a legendary entertainer, and I know his performance will be unforgettable.”

John is one of the top-selling solo artists of all time. In the U.K. and U.S. charts alone, he has one diamond album, 32 platinum or multiplatinum albums and 21 gold albums, as well as over 70 Top 40 hits. John has sold more than 300 million records worldwide and holds the record for the biggest-selling single of all time, “Candle in the Wind 1997,” which sold over 33 million copies. At present, he has logged 70 Billboard Hot 100 entries, including nine No. 1s and 28 Top 10s. “The Lockdown Sessions,” an album of collaborations recorded during the COVID19 pandemic, was released in October 2021 and became John’s eighth U.K. number one album.

Proceeds from the Art+Film Gala support LACMA’s initiative to make film more central to the museum’s curatorial programming, while also funding LACMA’s broader mission. It supports exhibitions, acquisitions and educational programming, and screenings that explore the intersection of art and film.

KCCLA exhibit on the art of calligraphy