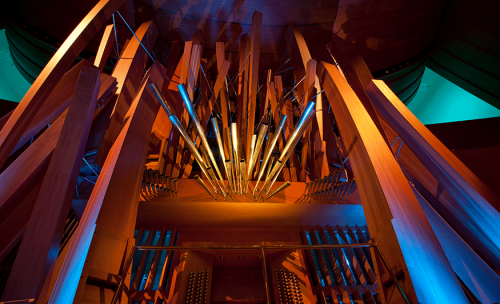 Inaugurated in 2004 at the opening of the Los Angeles Philharmonic’s second season in Walt Disney Concert Hall, the organ’s striking visual design was a collaboration between Frank Gehry and organ builder Manuel Rosales. It is voiced with a wide dynamic range – from pianississimo to a breathtaking fortissimo that can even overpower the sound of a full orchestra. The specially curved wood façade pipes are actual playing pipes that were made by Glatter-Götz Orgelbau in Germany and consist of the Violone and Bassoon basses. Behind the façade are three levels of pipes, including metal pipes made of tin and lead alloys and wood pipes made of Norwegian pine. The organ, affectionately called “Hurricane Mama,” was so named by musical visionary Terry Riley after a night of improvisation.

Peter Edwards and Oleta Haffner were selected by the Academy as the participants for the Jonas Gwangwa Music Composition Initiative.