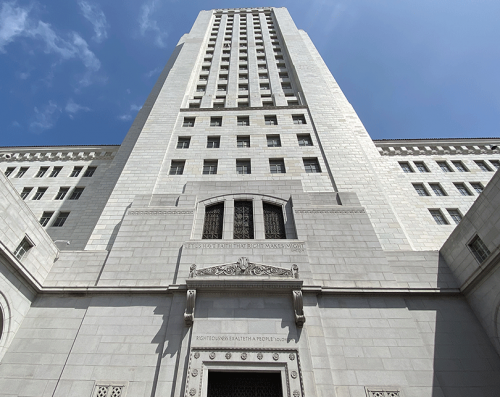 The City Council met virtually on Oct. 18-19 and approved motions intended to put city government back on track after turmoil last week. (photo by Edwin Folven)

The Los Angeles City Council took steps on Oct. 18 and 19 to begin the process of restoring faith in city government amid upheaval over racist remarks by three council members in a recorded conversation made public on Oct. 9.

One of the council members on the recording – former Council President Nury Martinez – resigned on Oct. 12. The other two – Councilmen Kevin de Leon, 14th District, and Gil Cedillo, 1st District, have not resigned and were not present during council meetings this week.

Despite their refusal to step down, the remaining council members moved forward with city business on Oct. 18, electing Councilman Paul Krekorian, 2nd District, as the new council president. City Council meetings were held virtually this week due to Councilmen Mike Bonin, 11th District, testing positive for COVID-19, as well as Krekorian. Krekorian was nominated as council president by Councilman Marqueece Harris-Dawson, 8th District, and was elected in a unanimous vote among the 10 council members present at the meeting.

“I offer my deep thanks to each of you for the confidence that you’ve showed me,” Krekorian told his council colleagues. “This is, needless to say, one of the most challenging times our city has ever faced and I’m ever mindful of what’s before us, and I appreciate that support very much.”

Krekorian, whose district is located in the eastern San Fernando Valley, said he plans to work closely with fellow council members to move past the crisis caused by the racist and derogatory remarks. He said more collaboration is needed and he will reduce the decisionmaking power of the council president, who appoints committee members and presides over meetings.

“We will continue to move forward as we have in overwhelmingly calling for [de Leon and Cedillo’s] resignations. But we cannot wait to continue to do the business of Los Angeles,” Krekorian said. “We will also do something that you don’t often hear from somebody who gets a new position. I will advance tangible steps to ensure that the power of the council president is reduced, not increased. The era of unilateral decision making on this council and consolidating power … ends today.”

Krekorian was referring to the context in which the racist comments by Martinez, de Leon and Cedillo were made: redistricting. The three council members were recorded during an October 2021 private conversation with Los Angeles Labor Federation President Ron Herrera during a discussion about how to create council district boundaries that would benefit their districts during the once-adecade redistricting process. To prevent a similar situation from occurring again, the council adopted two measures on Oct. 18. One will place a ballot measure before voters in 2024 to create an independent redistricting commission. The second affirmed a study of potentially increasing the number of council districts citywide from 15 to a number to be determined. To increase the number of districts, voters will have to approve a charter amendment.

The motion to expand the number of council districts was authored by Los Angeles City Council President Pro Tempore Mitch O’Farrell, 13th District, who served as acting council president from Oct. 10, when Martinez stepped down from the position, to Oct. 18, when Krekorian was elected to the position.

“I am grateful to my colleagues for their unanimous support of my charter reform initiative,” O’Farrell said. “I am eager to move forward with this imperative and to put before voters this opportunity to decentralize the power structure in our city. Even as we navigate this challenging period, we took the first step to ensuring fairer, more equitable, more accountable representation in Los Angeles.”

O’Farrell never sought to become the permanent council president, his spokesman Dan Halden said. O’Farrell, who is facing re-election on Nov. 8, stepped in to the role when the crisis regarding the racist remarks began last week, but wanted to give his colleagues a chance to select the person they want to serve as their leader.

“I congratulate Councilmember Paul Krekorian on his election as the first Armenian American to serve as president of the Los Angeles City Council,” O’Farrell said. “As I hand the baton to Council President Krekorian, I have full faith and confidence that he will help guide our city with the experience, steady hand and unifying voice that these challenging times require. With [the] unanimous vote to move forward with my charter reform initiative that will increase representation and redistricting that is completely independent of this elected body, I know the council president will help ensure we directly address the very issue that has caused such devastation and harm. I am eager to work with Council President Krekorian and all of my colleagues to expeditiously move this imperative forward.”

Councilman Paul Koretz, who is termed out in November, also supported Krekorian as council president. During the Oct. 19 City Council meeting, Koretz introduced a motion seeking ethics reform in the city charter.

“The scandals at City Hall unfortunately have made the prevailing skeptical view of City Hall seem justified. The role of an elected leader is not one of entitlement but of privilege, and placing principles over politics and conscience over political power is a requirement of this job,” Koretz said. “For those of us who hold sacred those values and that responsibility, we need to be beyond reproach and willing to hold one another accountable. To that end, we are working to ensure that the Ethics Commission has the tools it needs to hold our city officials to the highest ethical standards. And while there’s much, much more work to be done to regain the confidence of Angelenos, this is an important piece of that puzzle.”

Los Angeles City Attorney Mike Feuer also weighed in, calling for the council to call a special election on reforming the redistricting process.

“The recent release of the hateful conversation in which three council members discussed how City Council districts should be drawn makes inescapably clear that the city needs a truly independent redistricting process to ensure the fairness and legitimacy of district boundaries and the system that establishes them,” Feuer said. “We need to act urgently to begin to heal the divisions in our city, reform how our city conducts business and restore public confidence and trust.”

The calls for the de Leon and Cedillo to resign continue to reverberate throughout the community. Some said they support reform as the only way to put the city back on track and restore confidence in elected officials. Former Councilman and Los Angeles County Supervisor Zev Yaroslavsky said he had never heard “anything remotely like” the racist comments on the recording during his tenure in government. He added that the city must have a redistricting process that it independent of incumbent council members.

“I think there’s no question that a truly independent commission needs to be created, and I’d hope that they’d find a way that the independent commission would be knowledgeable in the area, would maybe have retired judges or people who understand voting rights law,” Yaroslavsky said. “[The vote on Oct. 18] is a step in the right direction, but the devil is in the details and we will see where it leads.”