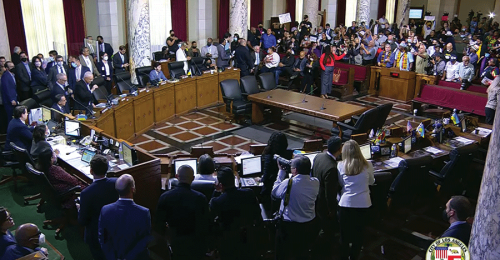 Demonstrators packed council chambers on Oct. 11 to demand the resignations of the three council members who made racist remarks in a recording made public on Oct. 9.
(photo courtesy of the city of Los Angeles).

The Oct. 12 council meeting was adjourned shortly after 11 a.m. without any business taking place due to the unruly crowd. At approximately 2 p.m., Martinez announced she is resigning from the council.

“It is with a broken heart that I resign my seat for Council District 6, the community I grew up in and my home,” Martinez said in a statement.

“For Los Angeles to heal, and for its City Council to govern, there must be accountability. The resignation of Councilmember Nury Martinez is the first, necessary step in that process,” said acting City Council President O’Farrell, 13th District. “To that end, I repeat my call on Councilmembers de Leon and Cedillo to also resign. There is no other way forward.”

At the Los Angeles City Council meeting on Oct. 11, the council heard from dozens of public speakers who condemned racist remarks made public on Oct. 9 in a recorded conversation between Martinez, 6th District, de Leon, 14th District, and Cedillo, 1st District, and Los Angeles Labor Federation President Ron Herrera. O’Farrell stressed that the council wanted to allow the public to voice their concerns over the racist remarks, which targeted Blacks and minorities. The City Council approved a resolution at the Oct. 11 meeting calling for the three embattled council members to resign. Leaders from throughout the political spectrum have also called for their resignations, including President Joe Biden, who said the remarks were unacceptable and appalling, according to White House Press Secretary Karine JeanPierre.

Martinez apologized for making the comments and stepped down as council president on Oct. 10. She announced on Oct. 11 that she is taking a leave of absence and was not present at the council meeting.

The recording was allegedly made in October 2021 during a conversation between Martinez, de Leon, Cedillo and Herrera about the redistricting process. The recording had previously been uploaded to Reddit by an anonymous source and has since been removed from the website. The source of the recording has not been revealed. In the recording, Martinez makes a racist remark in Spanish about Councilman Mike Bonin’s adopted son, who is Black, and stated the boy deserved a “beatdown” for allegedly misbehaving while riding on a float in a Dr. Martin Luther King Day parade. De Leon likened Bonin bringing his son to the parade to Martinez carrying a “Louis Vuitton bag.” At another point in the conversation, Martinez refers to Los Angeles County District Attorney George Gascon, stating “F**k that guy, he’s with the Blacks.” When discussing the redistricting process and how the Koreatown area would be divided, the three council members joked about the Oaxacan population in eastern Koreatown, with Martinez stating that she sees a lot of “short, dark people” in the area.

O’Farrell denounced the remarks and said the City Council will vote on a new president at its meeting on Tuesday, Oct. 18. He said the council is also considering a ballot measure to create an independent redistricting commission and create more council members and districts. 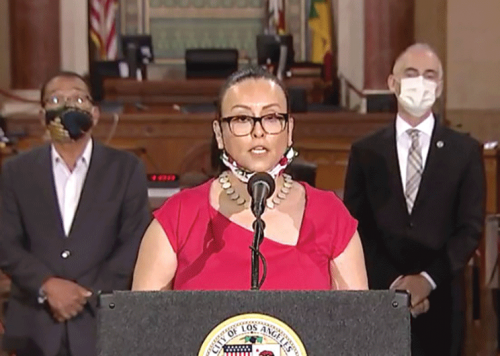 Former Councilwoman Nury Martinez stepped down as council
president on Oct. 10, and resigned from the council on Oct. 12. (photo courtesy of the city of Los Angeles)

“At this critical and devastating moment, I’m here to affirm there is no place for this. There are no excuses. Not in this chamber, not as a member of this body, not in this building, not in this city, not in the year 2022, not ever,” O’Farrell said. “I do not believe we can have the healing that is necessary, or govern as we need to while [the councilmembers] remain [on] this council. I say those words with a heavy heart, but this is a heavy and a deeply tragic moment for this city. They need to consider what is best for the city and the people of Los Angeles.”

The number of City Council seats is set by the city charter, which can only be amended by voters. O’Farrell’s motion instructs the chief legislative analyst and city attorney’s offices to return in 30 days with a report on the process for creating a 2024 ballot measure to increase the number of City Council seats from 15 to a larger number to be determined, based on population growth. The motion also calls for a report on expanding the redistricting process to involve more members of the public.

California Attorney General Rob Bonta launched an independent investigation on Oct. 12 into the Los Angeles City Council and the city’s redistricting process. The investigations will determine whether state or federal voting rights laws and transparency laws were violated.

“As a father and human being, I am deeply appalled by the remarks made by some of Los Angeles’ highest-ranking officials. Their comments were unacceptable, offensive, and deeply painful,” Bonta said. “As Attorney General, I am committed to doing my part to ensure the rights of the people of California are protected. The decennial redistricting process is foundational for our democracy and for the ability of our communities to make their voices heard – and it must be above reproach. The leaked audio has cast doubt on a cornerstone of our political processes for Los Angeles. Given these unique circumstances, my office will investigate to gather the facts, work to determine the truth and take action, as necessary to ensure the fair application of our laws.”

Bonin, who announced on Oct. 12 that he tested positive for COVID-19 and was not in council chambers, wiped away tears while speaking during the Oct. 11 council meeting. Bonin said he and his husband Sean Arian were deeply offended by the remarks.

“I am reeling from the revelations of what these people said, trusted servants who voiced the hate and bias. Public officials are supposed to call us to our highest selves, and these people stabbed us and shot us and cut the spirit of Los Angeles. It gave a beatdown to the heart and the soul of the city,” Bonin said. “The city is strong and the city has a very big heart, and Los Angeles is going to heal. We can be, with a lot of work, a city where a reality matches our aspirations. We need to be a city that doesn’t just issue a statement of indignation over something like this, but does the work to make sure that no little Black boy, no young Latina, no kid anywhere hears this, and that no community feels disenfranchised and disempowered.”

Other council members also said they were disgusted by the remarks.

“I am appalled at the racist, dehumanizing remarks made by Los Angeles city officials and leaders that were made public,” added Councilwoman Nithya Raman, whose 4th District was dramatically altered during the redistricting process. “At a time when our nation is grappling with a rise in hate speech and hate crimes, these racist comments have deepened the pain that our communities have endured. Los Angeles deserves better.”

“I am shocked and appalled by the jaw-droppingly terrible statements and behavior of Council President Nury Martinez,” Koretz said in a statement.

“As hateful as the remarks by these officials were, we can’t ignore the context in which they came. It was redistricting. It should be clear to everyone by now that leaving the power to draw their own district lines in the hands of the politicians who stand to benefit from how those lines are drawn is a massive conflict of interest and an invitation to the sort of backroom dealing this outrageous conversation revealed,” Feuer said. “I called for an independent redistricting commission more than a year ago and renew that call. And, I strongly support the motion that would begin the process of amending the charter to do just that.”

Numerous other officials from many different parts of the local political spectrum also condemned the racist comments, including L.A. mayoral candidates Rick Caruso and Karen Bass.

“The comments … were racist and deeply offensive,” Caruso said. “Now, we must unite and strongly repudiate what was said. My heart goes out to Councilman Bonin and his family. Now, strong action must be taken. I do believe that in their hearts they are better people than the vile comments we heard on that tape. But they also know they are role models and they have let our city down. Being a leader means taking full responsibility for your actions. In this important moment for our city, anything short of resignation completely fails that test.”

“Los Angeles must move in a new direction, and that is not possible unless the four individuals caught on that tape resign from their offices immediately,” Bass said. “I want to again say to the innocent child who is caught in the middle of this that he is beautiful, brilliant and loved. From some of L.A.’s most powerful leaders, we heard racism and bigotry against Black, Indigenous, LGBTQ+, Armenian and other Angelenos, as well as slurs against a child. We also heard them stoking the divide between our city’s Black and Latino communities. To move forward as a city, we must move past the politics of divide and conquer. There is no place for division and hate in Los Angeles. The challenges we face in our city affect us all – and we must unite around our shared values if we are to overcome them and achieve the common dreams we all have for our families.”

Candidates Katy Young Yaroslavsky and Sam Yebri, who are running for the 5th District Los Angeles City Council seat, said they were disgusted by the statements and called for the three council members to step down.

“No one in that room should keep their job because they have forfeited the trust of the people they were supposed to represent,” Yaroslavsky said. “I renounce the endorsements of Councilmembers Martinez and de Leon. Their words do not reflect my values.”

“In order to move forward as a city, I renew my call that Kevin de Leon and Gil Cedillo resign from the City Council immediately,” Yebri said. “We cannot tolerate policymakers who harbor – and make decisions based on – racist and homophobic views. This leadership crisis illustrates how entrenched politicians circle the wagons to protect their own. Los Angeles cannot move forward and solve our many problems until we are willing to change our city’s leadership.” Cedillo apologized for not stepping in and denouncing the remarks during the conversation.

“I want to start by apologizing. While I did not engage in the conversation in question, I was present at times during this meeting last year. It is my instinct to hold others accountable when they use derogatory or racially divisive language,” Cedillo said in a statement. “Clearly, I should have intervened. I failed in holding others and myself to the highest standard. The hurtful and harmful remarks made about my colleague’s son were simply unacceptable. We choose public life, but our families should always be off limits and never part of the political discourse.”

The remarks were also condemned by West Hollywood officials.

“I am shocked, angered and deeply disappointed by the hateful and racist words we heard come from the mouths of Councilmembers Martinez, de Leon and Cedillo, and Labor Federation president Ron Herrera,” Horvath said. “I do not believe these words are representative of who we are as a community, and I stand in solidarity with every individual and every community that has been affected by these hurtful words, including and especially Councilmember Mike Bonin and his family.”