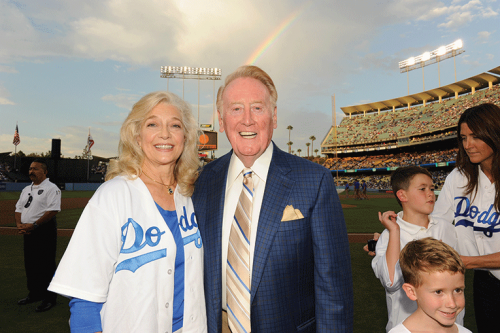 Writing is either “a socially acceptable form of schizophrenia,” as per E.L. Doctorow, or – in the right hands – playful therapy.

I’m of a mind lately that nothing is ever all one thing. L.A. is neither paradise nor living hell. Some critic recently blasted my hometown of Chicago as just that: A LIVING HELL. Obviously, every American city has some hellish traits. I mean, have you seen the Cubs lately? Have you tried parking in Beverly Hills?

Gloriously, and most obviously, L.A. has the Dodgers, who have become a gold standard for all of sports, because of a ruthless front office, deep pockets, a mensch of a manager and a pitching staff so rich that when its young-bull ace goes down for a year and a half no one even flinches.

This franchise’s all-time MVP – every franchise has one: for the Giants, it was Willie Mays; for the Cubs, it was Ernie Banks – for the Dodgers, it was Vin Scully.

He built this brand.

Old Man O’Malley just had a knack for this game, and when he marched his team west, some advised him to pick a more laidback announcer, someone more suited to L.A.’s butterscotch sunsets. O’Malley stuck with Scully, then scooped Dodger Stadium out of the rocky Earth, as you might mine a diamond.

Suddenly, he had two diamonds. Then Koufax came along.

The rich get way richer. Is this the best, richest Dodger team in history? Well, let’s look at the asset sheet. Trea Turner flows into second base like Fred Astaire. Freddie Freeman drops hits like Nicklaus dropped putts. Mookie Betts is quicker than a double-entendre. Sometimes, you can’t even see his roadrunner feet spinning. Beep-beep!

This Dodger team is punchy and rhythmic all at once – a trait all the great ones share. The ’27 Yankees. Muhammad Ali. John Coltrane. Where grace and strength meet, there is always glory, whether it’s a sports figure or a society.

I recently penned a piece on L.A.’s black-velvet nights, the sea of lights you admire when you gaze down from Mulholland, at the millions of homes, the millions of lives. What are they all doing? Making love? Feeding the dog? One thing for sure: Many are watching the Dodgers. We all watch the Dodgers. It may be the greatest thing this disparate city has in common.

Best of all, the stadium, L.A.’s most egalitarian hangout. I have spent a ton of time at Dodger Stadium, every nook, every cranny. I once went on my day off, just to watch them rebuild the pitcher’s mound, L.A.’s grandest pulpit.

Some people can’t leave perfection alone – keep trying to paint a mustache on this masterpiece. They add more strobes to Dodger Stadium, more speakers, more mayhem. This year, there’s even a speakeasy behind a mysterious door in the outfield pavilion.

Dodger Stadium is supervised by men – mostly men – with plenty of moxie but no soul. They are the kind of guys who wore clip-on neckties in college because they couldn’t figure out the knot.

Their catering service is the worst of all time. Earlier this season, Levy Restaurants handcuffed legendary peanut vendor Roger Owens, demanding he hand peanut bags out rather than flinging them, as he has famously done since the stadium opened in 1962. Evidently, parking will always be a disaster. The concession areas are a sticky mess. The prices, usury.

This is exactly how rich empires roll.

Look, baseball has stolen my foolish heart no matter what – I love it beyond reason. It brings to mind the C.S. Forester line, “When a man who is drinking gin neat starts talking about his mother he is past all argument.”

That’s me and baseball. This slow, magnificent game is one of several things God gives us to make up for the disappointments. Baseball, golden retrievers, pumpkin moons. My only major gripe these days is all the pitching changes. Plus, the way Major League Baseball divvies up its war chest, giving major media markets like L.A. and New York disproportionate proceeds, so smaller markets can’t afford to compete. You might say, “Hey, they earned it, let them keep the spoils,” but that’s not how the world works today. The world works on parity and fairness. We’ll see how all that pans out. As Vinny might put it: “Fascinating stuff, isn’t it?” Till we get an answer, we have these Dodgers to marvel at. Sweet Jesus, they’re good … so silky, so confident that they make baseball look easy. Love is hard. Life is harder. Baseball is hardest of all. And these Dodgers wink at it. Seems almost pre-ordained that they will go all the way. Of course, baseball is a long pregnancy – almost nine months. Nothing’s ever over till the fat catcher sings. Yet, let’s enjoy this sweet October. To borrow from Doctorow again, baseball is either a socially acceptable form of schizophrenia, or – in the right hands – a playful therapy. Man, are these guys good. Go Dodgers. As a sports columnist for The Times, Erskine wrote on the Dodgers for 10 years. For current columns and books, please go to ChrisErskineLA.com.

BHUSD investigating student’s 'willful use of force' on school employees