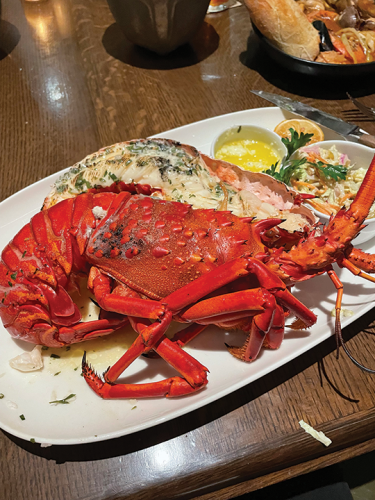 Not only is there an enticing Dine LA menu at Water Grill in downtown Los Angeles right now, it is also spiny lobster season.

The leather-bound menu has so many seafood-centric options, it was difficult to decide what to choose. If you haven’t dined at Water Grill, which is located off the lobby of an exquisite historic building, the three-course Dine LA menu is offered through Oct. 28.

Diners can select wild jumbo shrimp cocktail, crispy fried calamari, a mixed organic green salad or even three freshly shucked oysters as an appetizer. Wines can be paired with each course, starting with a glass of Chalk Hill Sauvignon Blanc from the Russian River Valley. Entrées include shrimp scampi, farmed New Zealand King salmon, or an 8-ounce Double R Ranch filet mignon. The wines paired with these entrée items are a 2021 Duckhorn Vineyards Chardonnay from Napa or 2019 Truchard Vineyards Cabernet Sauvignon from Carneros. Finish a glass of 2021 Saracco Moscato d’Asti from Piedmont, Italy 2021, and dessert choices of a caramel bread pudding, a key lime pie or chocolate espresso cake with Luxardo cherry ice cream. This multi-course dinner is $75, and if you select the wine pairing, add an additional $35.

I decided to skip the Dine LA menu because it is spiny lobster season, and I wanted to enjoy this seasonal dish. Spiny lobsters are caught off the coast of Southern California between October and March. The Water Grill, part of King’s Seafood, source the spiny lobsters directly from local fishermen. They are the most strictly regulated fisheries in North America and are known to be one of the very best seafood products in the world. Spiny lobster is considered California’s signature seasonal delicacy.

At Water Grill they charcoal grill the lobster until it turns bright red and brush it with a sauce similar to a Rockefeller of butter, parsley and other herbs. It’s served with a delicious coleslaw with raisins and apple, as well as julienned white cabbage and carrots.

There are many differences between spiny lobster and Maine lobster. First, spiny have around 25% more meat per pound, and they don’t have claws. Spiny lobsters swim away from predatory threats, using powerful thrusts of their tails, rather than fighting the way Maine lobsters do with their big claws. Their spine and tail are used for defense and, as a result, are meatier.

Second, spiny lobsters are unique scavengers and have long and strong antennas to search the bottom of the ocean floor for their organic diet of urchins, snails, smaller fish, clams and mussels.

Lastly, these lobsters generally fall within the 1.25 to 2-pound range, but can grow up to 20 pounds.

My husband ordered the cioppino, and my daughter went with the wild Pacific Bigeye tuna poke and wild Spanish octopus.

We all shared an heirloom tomato salad with chopped avocado and watercress tossed in a light poppy seed dressing with Water Grill’s delicious sourdough Parker House rolls. The rolls have a sprinkling of sea salt on top and are slightly crisp on the outside and soft and warm inside.

The just caught and fileted tuna poke came with crispy wonton rectangles that were easy to scoop the chopped fish and avocado that were dressed in a soy sauce with chopped chives, white sesame seeds and wasabi tobiko. A mild smoky-salty taste, with a hint of sweet, radish-like heat rounded out the dish.

A plate of charcoal grilled creamy fingerling potato medallions mixed with small and dark Nicoise olives from France and chopped oven roasted tomatoes was topped with a large, fresh and wild Spanish octopus tentacle that was easy to cut, yet firm and not chewy.

The spiny lobster entrée was cut down the middle and served with both halves, easily a two pounder.

In between bites of lobster, my husband and I shared a large bowl of cioppino, another feast for the eyes. The brick-colored shellfish and fennel broth is a fisherman’s stew filled with large pieces of Dungeness crab in its shell, jumbo shrimp simmering, calamari, fresh fish and popped open mussels and clams. The broth is heavenly and meant to be spooned after de-shelling the treasures from the sea. It’s served with crusty bread to soak up the broth and enjoy.

For dessert we chose the caramel bread pudding, from the Dine LA menu. It’s a little bit like a soft, warm French toast served with a scoop of delicious salted caramel ice cream.