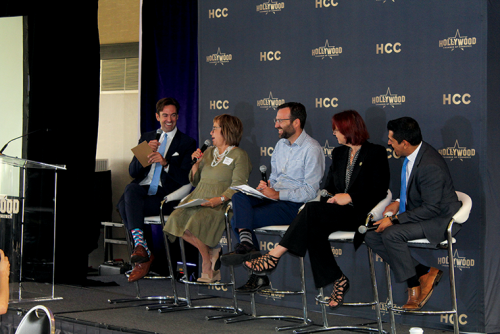 Although California has enjoyed historic budget surpluses in recent years, the state’s funds are distributed unequally, and the disparity is evident in soaring rents, rising crime and homelessness, said state lawmakers gathered at a Hollywood Chamber of Commerce breakfast on Sept. 30, who spoke during a panel moderated by Fox 11 news anchor Elex Michaelson.

“I’m not going to paint a rosy picture and tell you ‘Hey we’re doing great,’ because I don’t think that tells what happened in California,” Assemblyman Miguel Santiago (D-Los Angeles), said. “We have to reevaluate what works and what hasn’t, and for who and for whom not.”

While the panelists described problems affecting residents across the state, the effects of the problems are acutely felt in Hollywood, where the film industry continues be a huge engine of economic growth.

In her 25 years as a film development executive and producer, Friedman said she saw how many productions decided to film in Canada because of its film tax credit, or in North Carolina and other states where costs are lower. Now, as an assemblywoman representing many people in the film industry, she noted how moving with a production strains working families.

“Not having to go shoot for six months, seven months, eight months or a year out of state, and leaving their families behind, is important for them and their families,” Friedman said.

She said that California’s diversified economy and liberal values, which align with many in the film industry, will continue to make the state an attractive place to shoot. But film crews need a financial reason to stay in the state, which makes it all the more important that California now has its own film tax credit, Durazo said.

Passing the tax required public outreach, as lawmakers had to convince constituents that the tax was not a subsidy for wealthy people and that the film industry creates “tens of thousands of incredible careers where you can raise a family, you have the benefits that you need. It’s strong middle class jobs,” Durazo said.

Still, there are more challenges the film industry needs to overcome:

“The hiring of women and people of color,” Durazo said, adding, “We have to do a better job.”

But there are other statewide issues affecting economic growth in Los Angeles’ film and tourism industry, most prominently crime and homelessness, Michaelson said.

“When people think of Hollywood, they think of the studios, but … increasingly, they also think of homelessness and crime,” he added.

Allen called for a reimagined police force to maintain order in Hollywood and keep visitors and residents safe, specifically calling for an increased police presence on Metro trains and buses.

Unlike in other cities across the world where public transit is used by people from all strata of society, Metro largely serves the city’s poor. Without any better option, they are left to ride in trains where they feel unsafe, Allen said.

“When you go on to the Red Line, the Purple Line, it’s … folks who can’t afford a car who are there, and they quite frankly feel scared,” Allen said. “We really need to redouble our investment in safety on the subway lines.”

Durazo said that legislators have tried to use the state’s surplus funds to improve public transit infrastructure, but more has to be done. Besides increasing the number of people who ride public transit, the state should also invest more heavily in the manufacturing and upkeep of public transit facilities and equipment, which creates good-paying middle class jobs.

She added that the state already has in place a number of programs to provide services for people in different phases of homelessness, but that without the ability to find stable employment, the programs have failed to stop the growth of the homeless population.

Durazo pointed to the homeless tax credit, a package of legislation she introduced last year with Assemblyman Richard Bloom (D-Santa Monica), through which employers could claim $30,000 annually for hiring homeless employees, as one of the best paths to stability.

Santiago said that the Community Assistance, Recovery and Empowerment Act is another of the state’s most innovative pieces of legislation tackling the root causes of homelessness.  Under the legislation, homeless people with severe mental health disorders can be referred to and held by CARE Court, where they are given long-term comprehensive treatment plans.

“If all we’re saying to them is come here and get a room at a hotel or a motel, where’s the hope for them? Why should they believe that things are going to change?” Durazo said.