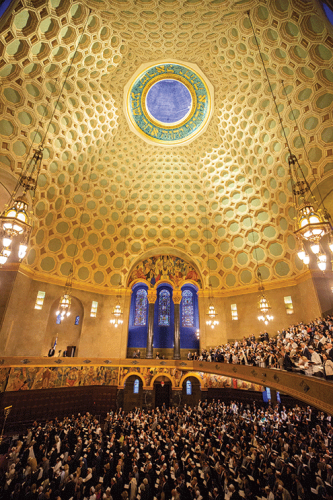 Stepping into Wilshire Boulevard Temple’s Magnin Sanctuary, one is unlikely to run into a movie star, but if they look closely, they’ll find Hollywood’s influence hanging in one of the temple’s chandeliers, nestled in the stained-glass windows and even painted in the portraits on the walls.

In fact, without the support of Hollywood magnates such as Louis B. Mayer and the Warner brothers, much of the sanctuary’s ornate decoration wouldn’t have been possible, said temple archivist Nan Goodman.

“You’re not going to walk into a service and sit next to Adam Sandler or Barbra Streisand or Seth Rogan — that’s not going to happen,” Goodman said. “But people call the sanctuary Hollywood’s temple because of all the support it got from Hollywood while it was under construction.”

Established in 1862, Wilshire Boulevard Temple was the first Jewish Congregation in Los Angeles. Before its current location at 3663 Wilshire Blvd., the congregation gathered at the Fort Street Temple, on what is now Broadway in Downtown Los Angeles, and then at a synagogue at the intersection of 9th and Hope streets.

It wasn’t until the early 1920s that temple leaders recognized the need to build a new, larger sanctuary to accommodate a rapidly-growing congregation.

Under the leadership of Rabbi Edgar F. Magnin, the temple selected its current location, along one of the city’s main thoroughfares. The building was designed by architect Abram Edelman in a Romanesque-Byzantine style, which is characterized by its massive size, wide pillars and decorative arches.

The sanctuary cost $1.5 million to construct — about $26 million today. After 18 months of construction, the sanctuary was dedicated in June 1929. It was named the Magnin Sanctuary after Rabbi Magnin.

Though the outside of the sanctuary is grandiose, Goodman said that it was important to Rabbi Magnin that everyone who stepped inside felt welcome, no matter their background.

“It was a huge time in Los Angeles because it was a new frontier. Immigrants were coming into Los Angeles from all over Europe,” Goodman said. “It is now a booming town with a lot of people coming from different backgrounds, and Rabbi Magnin wanted to create a sacred space where everyone felt welcome.

“He wanted everybody who came in here to practice their Jewish religion to realize and remember they all share the same roots.”

The interior of the Magnin Sanctuary is modeled after the Pantheon in Rome. Adorning the walls is a 7-foot-tall mural that spans 320 feet around the sanctuary.

Jack, Harry and Albert Warner donated the temple’s murals in memory of their late brothers, Milton and Samuel. Hugo Ballin, a muralist and early Hollywood art director, was commissioned to depict 3,000 years of Jewish history on the sanctuary walls.

Included in the mural are paintings depicting the story of creation; the prophets, rabbis and sages of old; and the Messianic Age to come. Though the paintings depict thousands of years of Jewish history, Ballin found a way to bring Hollywood’s history to the sanctuary walls as well.

Ballin’s wife, Mabel Croft Ballin, was an actress of the silent film era. When looking closely at several characters depicted in the sanctuary’s mural — including scenes from the Song of Songs and depictions of the four mothers, Sarah, Rebecca, Rachel and Leah — one can see Mabel Croft’s likeness.

Ballin also took inspiration from another woman he knew — Ruth Dubin, who was the wife of Rabbi Maxwell Dubin, who became a rabbi at the temple in 1925.

“Ruth always wanted to be in the movies, but it wasn’t a fitting profession for the wife of one of the rabbis of the leading congregation in Los Angeles,” Goodman said. “Hugo Ballin knew that, so he painted Ruth into the mural.”

The sanctuary seats 1,700, and like the great movie palaces of its day, the room slopes down to the front so everyone can see clearly, and there is no central aisle.

“The best seats in the house are in the center,” Goodman said. “So, the builders wanted to make sure that view was preserved.”

Aside from the Warner Brothers, Rabbi Magnin was able to secure donations from several other old Hollywood leaders. Louis B. Mayer, a co-founder of Metro-Goldwyn-Mayer studios, funded one set of the sanctuary’s tripartite stained-glass windows.

More than 5,000 pieces of stained glass are used on each side of the temple to depict the 12 tribes of Israel. Facing Wilshire Boulevard is a stained-glass rose measuring 25 feet in diameter that depicts the Star of David and a Torah scroll.

Carl Laemmle, the founder of Universal Studios, donated a 13-foot chandelier made to look like a Sephardic spice box, which is used during the Havdalah, a Jewish ritual that marks the end of the holy Sabbath. Sid Grauman, who opened Grauman’s Chinese Theatre, donated a chandelier in the shape of the Star of David.

Not to be outdone, Irving Thalberg, an MGM film producer, paid for the decoration surrounding the sanctuary’s oculus. The oculus stretches 110 feet in height, and encircling the oculus is a verse in Hebrew of the Sh’ma, from Deuteronomy 6:4, which translates as “Hear, O Israel, the Lord our God, the Lord is One.”

“People say this must be the Hollywood temple, and this is why,” Goodman said. “What we’re talking about is the amazing support that Rabin Magnin got from old Hollywood to build this place.”

In 1981, the sanctuary was listed in the National Register of Historic Places. However, after 80 years of use, the temple needed restoration.

From 2011 to 2013, Los Angeles architect Brenda Levin, a longtime member of the congregation, led renovations, and the sanctuary was rededicated in September 2013.

Since its founding, the temple has grown to include three campuses, two campsites and a conference center. Don Levy, director of communications and marketing, said that as the temple continues to grow, it is always keeping an eye on its legacy and the heritage of the Jewish people.

“Just as this sanctuary was built in 1929 as a legacy for the future generations, we want to continue that tradition to remember and honor our heritage and the depth of our culture,” Levy said. “As a temple, we have always been a vibrant and vital part of the growth and development of the city of Los Angeles.”

“We’ve always had this position as community builders and leaders, helping one generation to the next thrive in this city, and we will continue to do so for generations to come.”

Guided tours of the sanctuary can be arranged by contacting the temple’s tour department at (213)835-2195 or by emailing tours@wbtla.org.