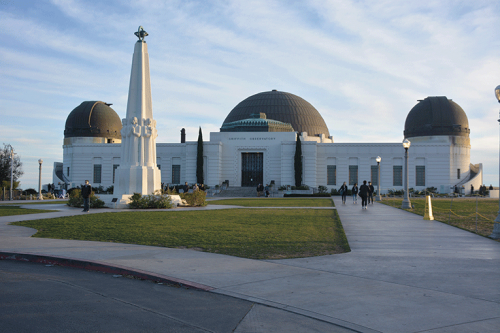 From the moment it opened in 1935, the Griffith Observatory has connected visitors to the stars above and also provided an iconic backdrop to the stars on the silver screen. While the institution’s dedication to accessible public astronomy has afforded locals and tourists the opportunity to gaze at the planets and take in sights like the Hollywood sign, viewers from all over the world have seen the observatory’s signature Art Deco domes in countless films and television shows.

Griffith J. Griffith first commissioned the observatory in 1896. An industrialist and philanthropist, Griffith donated 3,015 acres of land to Los Angeles for Griffith Park with specific instructions to build a free observatory and keep the land open to the public. When the observatory premiered to the public in 1935, it instantly became one of the park’s most celebrated landmarks. It didn’t take long for the bustling film industry to take notice of the Beaux-Arts building with Art Deco flair standing atop Mt. Hollywood surveying the studios below, and soon the observatory was cast as a key player in several films.

The year it opened, the Griffith Observatory was featured in the film “The Phantom Empire” starring Gene Autry. Many science fiction and fantasy films followed, such as “Crash of the Moons” in 1954, and “The Cosmic Man” in 1959.

“Of course, Griffith Observatory’s location makes it particularly bonded to Hollywood. We overlook the entire Los Angeles basin and Hollywood is right below us,” Griffith Observatory director Ed Krupp said. “Just physically, the observatory has been near Hollywood since it opened in 1935, and it just continues right through the decades, even through the present. The observatory is often selected for its location, its picturesque architecture and, of course, its meaning.”

The observatory now boasts a lengthy list of 170 filming credits, providing a recognizable setting for films like “La La Land,” “Jurassic Park,” “Back to the Future,” “Terminator” and “Transformers.” 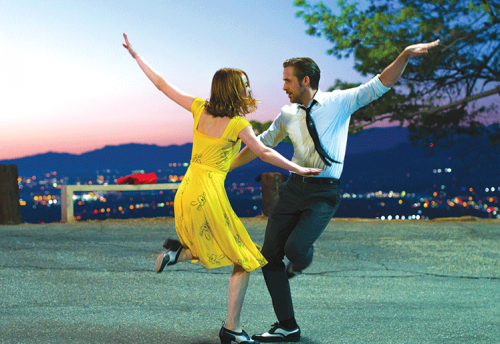 2016’s “La La Land,” utilized the observatory in a climactic scene to capture the magic of the city of stars, and the lead character’s stratospheric rise in love as they struggle toward stardom. The memorable score romantically swells as Gosling and Stone waltz through the planetarium, rising weightlessly toward the top of the dome.

The Griffith Observatory has also been a mainstay on television, playing roles in classic shows such as “Mission Impossible,” “Melrose Place,” and “NCIS: Los Angeles.” More recently, the observatory provided a stunning sunset backdrop for Adele’s televised CBS concert special, “Adele One Night Only,” where she belted her hits framed by the iconic triptych of domes.

In May, the institution premiered a motion picture of its own, “Signs of Life,” the first production to be created exclusively for the Samuel Oschin Planetarium in more than a decade. With daily showtimes, “Signs of Life” tells a cosmic detective story that allows audiences to uncover forces that created life in the universe. It launches audiences into space on a trip to Mars and the moons of Jupiter and Saturn, on the way to an exploration of the Milky Way. Krupp said it illustrates how the observatory has taken a few cues from Hollywood in telling the stories of the universe.

“Griffith Observatory has been in so many motion pictures, but there’s a deeper relationship that goes back very early,” Krupp said. “It has to do with the observatory learning from Hollywood, and then also Hollywood learning things astronomical. This is particularly important in terms of the new planetarium show ‘Signs of Life,’ where we created our own production studio and hired absolute masters of digital animation craft because we’re in the middle of Hollywood.”

The observatory remains an accessible public gateway to the stars for millions of visitors each year. Whether viewing the skies through free public telescopes, learning about astronomy in its exhibits or participating in an interactive program on space travel, visitors to the Griffith Observatory continue to be enchanted by the stellar place where celestial bodies and celluloid dreams come together.

The beauty that is The Wallis