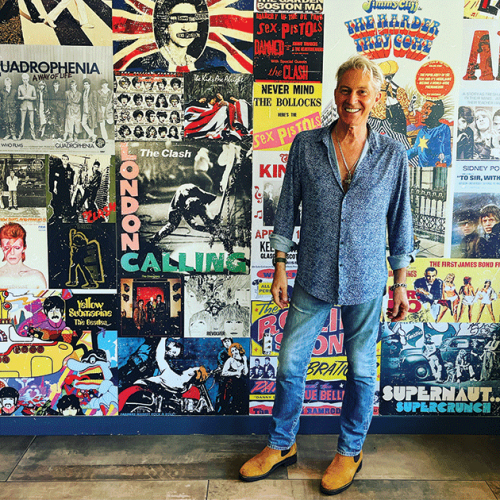 Sound the alarm and light your lanterns, because the British are coming to raise the roof at the contemporary British gastropub, Market Tavern, with its owner/rockstar, Gary Twinn, who is bringing England’s best hits and tastes to the Original Farmers Market. But don’t take my word for it. Perhaps you’ll be convinced by Sir Paul McCartney himself.

Twinn’s life journey is one that is reflected through the look and experience at the Market Tavern. His father uprooted his family when he was 11 years old from London and took them to Australia, where he made friends with English immigrant twins with whom he was destined to become an international musician. After a couple sessions of friends getting together and making music, the glam punk band Supernaut was born in 1969.

It was upon touring in Australia with the new band and their hit single, “I Like It Both Ways,” they caught the attention of rock legend McCartney.

“When we were playing in this pub, Paul McCartney came in,” Twinn said. “We didn’t meet him, but in an interview after, when he was leaving Australia, someone asked, ‘what was your favorite thing about Australia?’ And he said, ‘Oh ,so these kids playing in the pub, they weren’t that good yet but their enthusiasm reminded me of when we first started.’”

These swaggering behemoths – The Beatles – and others hang tall on the walls of Market Tavern, with the likes of The Rolling Stones, Queen, David Bowie and Supernaut captured, singing ode to the country and culture that inspires the life of the English pub today.

“That’s exactly what it is, it’s a pub,” Twinn said. “It means, Public House. And that’s what I wanted this place to be. A place to gather. Get food. To socialize.”

Fittingly located at the Farmers Market, historically known as a communal hub for shopping, dining and gathering, Market Tavern features a refined selection of authentic craft brews, locally applauded cuisine and its very own taste in rock, Gary Twinn.

A certain social atmosphere abounds at the Market Tavern that balances itself between the spunky and refined, much like the life of an international rocker. Above the celebrity photo-figureheads of the past hangs an assortment of TVs featuring the excitement of live football, baseball and also football – the word “soccer” dissolves at the door. With the eclectic Brit-rock jive, 24 taps – even Fuller’s English beer – and ranking in the top four burgers in L.A., according to The Infatuation, it’s no wonder why the Market Tavern has been an L.A. favorite for football fans, especially the L.A. Hammers.

Market Tavern opens early on days when West Ham United plays outside of their usual business hours. This tradition of gathering with friends for a beer and a cause not only is the leading spirit of the Market Tavern, but also for Twinn’s performing band, The Long Shadows.

Much like the simple origin of Supernaut, The Long Shadows started in the extended patio area as a means to lift spirits and provide a returning sense of normalcy as easing of COVID-19 restrictions took place – lead drummer at the time, Clem Burke, the exuberant drummer for Blondie, resorted to banging on tables for percussive elements. But as sporadic and intermittently the Market Tavern reopened, so in the same vein grew the band into the fullfledged musical brigade that we know and love today. With Mick Cripps and Luke Bossendorfer on guitars, Gaz Ivin on bass and Charlie Nice, subbing for Burke, on the drums, the band members united represent a revival not only of rock, but of the Farmers Market community on the whole. The Long Shadows play the patio on Fridays at 9 p.m. and are planning to release originals “I Know, I Know, I Know” and “Cross the Line” within the coming months.

Between the headbanging enthusiasm shared between performers and wait-staff, as well as the faithful Friday night patrons grooving on the dance floor and others toasting and enjoying the menu’s piece de resistance, fish ‘n chips, life is pretty spectacular when shared at the Market Tavern.

While performing his set with The Long Shadows, Twinn introduced his next song realizing neither he, nor the Market Tavern, quite resonated with its title:

“‘Where Have the Good Times Gone?’… Well personally, things have never been better.” Market Tavern is located at the corner of Third and Fairfax at the Original Farmers Market.

This game is our national nectar

It's time for Dodger Baseball