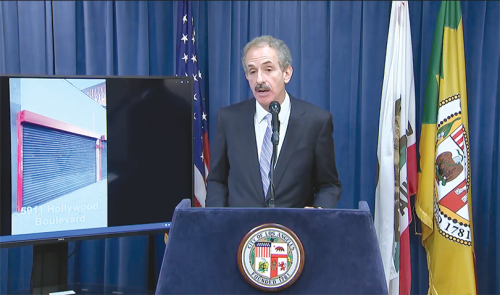 Los Angeles City Attorney Mike Feuer is cracking down on illegal nightclubs and announced on Oct. 27 that charges have been filed against the operators of two venues in Hollywood.

Feuer said that authorities received numerous complaints about the illegal nightclubs and police conducted investigations at both locations. One nightclub was located at 5911 Hollywood Blvd. and the other at 1707 N. Las Palmas Ave., and they were run by separate, unaffiliated individuals. The illegal nightclubs are now closed and the property owners are in the process of evicting the defendants, Feuer said. The tenants at the space on Las Palmas Avenue told the owners they were planning to open a coffee house, he added. The property owners at both locations are cooperating with authorities and are not believed to be complicit in the illegal activity.

“Hollywood nightclubs, like all businesses in the city of Los Angeles, have to play by the rules. And when they don’t, we take action,” Feuer said. “Illegal clubs serving alcohol without a license can be a dangerous combination, jeopardizing the public and drawing on scarce LAPD resources. And they’re stealing business from the clubs that have taken the appropriate steps to do things right.”

Two individuals have been charged in connection with the illegal nightclub at 5911 Hollywood Blvd. Defendants Dale Morrison and Erik Taylor each face five counts of violating a conditional use permit and dispensing alcohol without a license. They face two and a half years in county jail and a $5,000 fine if convicted.

Feuer said in June, officers discovered numerous parked cars blocking traffic outside the club at 5911 Hollywood Blvd., and a valet service that was allegedly operating illegally. Investigators identified two guards allegedly working outside without proper security guard registration cards. Officers stopped a car that was attempting to leave and found a loaded gun and bag of cannabis in the vehicle, he said. Inside the club, investigators found a bar, live DJ and people smoking cannabis, Feuer said. Officers dispersed the crowd and confiscated the DJ equipment and alcohol as part of the investigation.

Defendant Kemberly Placencia has been charged with four counts of illegal use of land, dispensing alcohol without a license and operating a dance hall without a permit in connection with the club at 1707 N. Las Palmas Ave. Police received numerous complaints and sent undercover officers to the location in August. Feuer said officers arrived at 2 a.m., paid an entry fee and were allowed to go inside by security guards. They allegedly observed a live DJ, bar and a small crowd dancing. Officers dispersed the crowd and confiscated the DJ equipment and alcohol as part of the investigation.

“Such flagrant violations of operating permits endangers the public and negatively affects quality of life,” added Councilman Mitch O’Farrell, 13th District. “Hollywood residents and stakeholders deserve peace of mind. On behalf of the local community, I’m grateful to see the swift action in these two cases.”

Feuer said people who have information about illegal venues should contact their local police station or his office at (213)978-8100. Information is also available at lacityattorney.org.