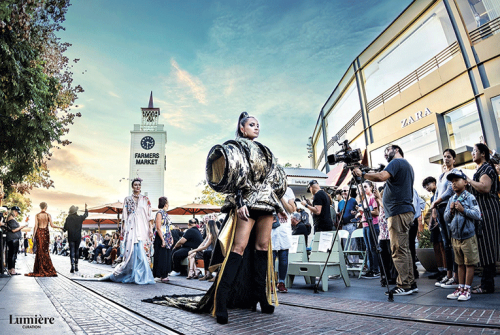 An outfit from the opening festivities of Metropolitan Fashion Week at the Farmers Market crafted by Saori Mitome. (photo by James Giovanni Pan)

Metropolitan Fashion Week returned to the Farmers Market for its opening event on Sept. 29. The fashion expo celebrated its 10th anniversary. Eduardo Khawam is the founder and president of the event, which also hosts shows in Seattle, Palm Springs and Las Vegas. This year’s theme was world architecture, with each designer in the show making their own “fashion masterpiece” based on designs from around the globe.

“Hollywood’s more than just fashion,” Khawan said. “It’s about television, motion pictures, commercials, music videos. Usually when you go to a fashion week, you will see ready-to-wear [clothes], and you have buyers trying to buy the collection. So, when I came out with the concept of Metropolitan Fashion Week … we didn’t want to create something that was already out there. So, what makes Metropolitan Fashion unique is that one 80% of the venues are historical buildings, museums or iconic locations, like the Farmers Market in this case.”

He went on to explain how the fashion mimics Hollywood costume designs, creating unique and striking pieces.

Khawan started the show based on a suggestion from a friend about stepping into the fashion space, after he experienced hard times with his event producing career. This suggestion came not long after Khawan had a chance encounter with then-Sen. Barack Obama. He had been looking for a sign to keep living out his American dream.

“And he told me, ‘Welcome to the U.S. I hope we are treating you very well. And I would love to see more people like you,’” Khawan recalled. After success with events in Seattle, he took his concept to Los Angeles. The show has enjoyed success here too over the last decade. This year’s closing festivities were held at Los Angeles City Hall on Oct. 1.