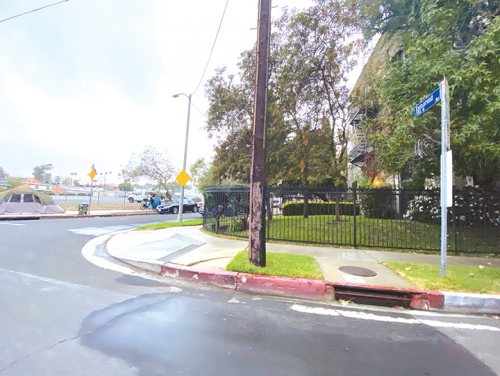 The victim was found unresponsive in the driver’s seat of a truck that was located near Tamarind Avenue and Carlos Street. (photo by Edwin Folven)

Police are searching for a suspect who shot and killed a man on Oct. 5 near the intersection of Tamarind Avenue and Carlos Street in Hollywood.

Officers received a call about shots fired around 11 p.m. and located an unresponsive man seated in the driver’s seat of a white truck that collided with parked vehicles near the intersection. The truck was found in a residential neighborhood just south of the Hollywood (101) Freeway and west of Bronson Avenue.

Firefighters and paramedics responded and pronounced the victim dead at the scene. The Los Angeles County Department of Medical Examiner-Coroner has not released the victim’s name pending notification of next of kin, but a coroner’s office spokeswoman said the victim was in his 50s. Investigators believe the victim was possibly homeless.

Detective Sean Kinchla, with the Los Angeles Police Department’s West Bureau Homicide Unit, said detectives have been canvassing the surrounding neighborhood searching for witnesses and security cameras, but police have few clues. No suspect description was available and police are uncertain about the motive for the homicide, Kinchla added.

Woman arrested after allegedly running man over with his car