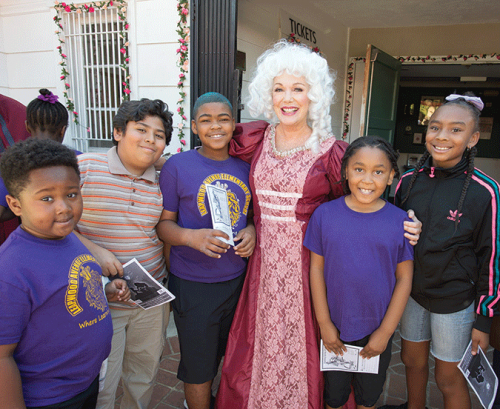 After two-plus years, Cinderella dusts off her glass slippers and triumphantly reopens the Assistance League’s Fountain Court Theater with the live production of “Cinderella: The True Story,” a magical musical look at the timeless children’s story.

Based on the classic fairy tale, “Cinderella: The True Story” presents the kind-hearted Cinderella who fights for a world where everyone – from tailors to kings – learns that bigger isn’t always better and that to truly be rich we should share what we have. A delightful musical production with singing, dancing, princes in disguise, and a fairy godmother who doesn’t always get things right.

Director Ward is a comedian, actress and singer who has performed improv and sketch comedy all over the United States. She cowrote the hit off-Broadway show “50 Shades! The Original Musical Parody” and has performed with Magic to Do, the UCB musical improv house team and the New York Times Critic’s Pick show “Baby Wants Candy!”

“We are thrilled to continue our 90+ year tradition of bringing extraordinary children’s theatre to Southern California’s students and their families, teachers, and caregivers,” producer Rachel Wecht said.

For tickets, call (323)545-6153 or visit nineoclockplayers.com or brownpapertickets.com to purchase tickets online. The Assistance League Theatre is located in Hollywood at 1367 N. St. Andrews Place.