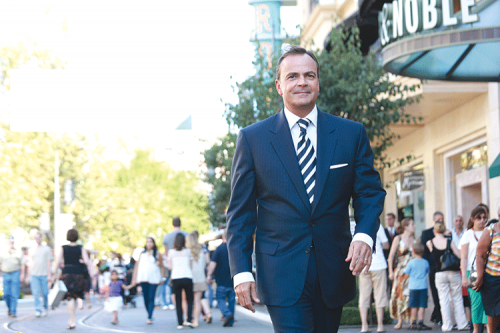 Candidate Rick Caruso will appear at campaign events across the city in the days leading up to the Nov. 8 General Election. (photo courtesy of Caruso)

With a little under three weeks left until voters select the next mayor of Los Angeles, candidate Rick Caruso remains optimistic about winning and plans to continue meeting with as many people, community groups and civic organizations as possible in the final days before the Nov. 8 General Election.

Caruso is continuing to spread his message about how rising crime and increasing homelessness have become deeply entrenched problems in the City of Angels, and how he plans to address the issues. He stressed that crime and homelessness are interconnected problems, and on his first day, he will declare a state of emergency regarding homelessness and will move to create 30,000 shelter beds to get people off the streets.

“I will take accountability and make the mayor responsible for the homeless response and coordinate all aspects, not the City Council with 15 different strategies,” Caruso said. “I will also immediately target the predators selling and distributing drugs to the homeless, ensnaring them in a desperate cycle of dependency and mental illness.”

Caruso said crime and homelessness have affected every community throughout Los Angeles. “We all know that we have a large population of people living on the streets … and a large sector of that population has mental illness and needs help. A large population of them are drug addicted and need help,” Caruso said. “They pose a threat to themselves, people walking down the street and small businesses. Look at that section on Melrose, crime rates in Hancock Park have gone up. It’s a problem citywide, but you have a fair share of it in [the Beverly Press’ distribution] area.”

Caruso added that one of his top priorities will be reducing crime, and he plans to increase the ranks of the Los Angeles Police Department.

“Making Los Angeles safe is a top priority, and I want to marshal more resources to protect the residents of Los Angeles,” Caruso said. “As mayor, I will lead with the strong belief that we need public safety that is fair and just, and combines compassion with results. As former president of the Police Commission, I have the expertise and a proven track record that drove a 30% reduction in crime. As mayor, I’ll do that again. I will put 1,500 new officers on our streets and expand community-based policing so our police reflect the communities they serve.”

The candidate also said a lack of affordable housing is a major problem in Los Angeles, and he plans to shepherd the construction of new housing that is accessible to people from disadvantaged communities and with lower incomes.

“The housing affordability crisis in L.A. is inextricably tied to the homeless crisis. As mayor, I will expand emergency rental assistance, creating emergency loans and rental assistance to prevent people from losing their homes. We need to build over 500,000 housing units over the next eight years. I am a builder, and we need a builder to make Los Angeles affordable,” Caruso said. “Issues of homelessness, crime and affordability are not being addressed by our city leaders because they are looking out for themselves and not for the people of Los Angeles. Angelenos are fed up with corruption that has pushed our city into a state of emergency. Enough is enough. It is no coincidence that while we heard the reprehensible recordings by three City Council members, and while another three members of the City Council have been arrested by the FBI, we’ve seen homelessness and crime skyrocket. We need an outsider who is not part of the system to fix our problems and clean up corruption at City Hall.”

Caruso said he plans to appoint an independent ethics czar to address corruption, and vowed to not meet with lobbyists or take money from special interests. The billionaire developer who built The Grove, Americana at Brand and many other shopping destinations said he will only accept a $1 per year salary. He stressed the current leadership in City Hall has failed the people of Los Angeles.

“For too long, career politicians have promised us solutions to these problems and they have only gotten worse. We are seeing time and time again that the system is broken. The status quo has made Los Angeles the way it currently is, and that’s why we need dramatic change now,” Caruso said. “The recent news about L.A. City Council confirmed that our city’s problems won’t be solved while the corruption of City Hall persists. To move in a new direction, we need new leadership. We need people in office who aren’t afraid to stand up for all Angelenos and not looking for special treatment. I’m running for mayor because Angelenos want change and deserve better than more of the same.”

“The message is that I am doing this because I have a great love of the city and history of governing the city. I’m the right candidate for mayor of Los Angeles because I’m not a career politician,” Caruso added. “Unfortunately, our system is broken. It’s full of corruption and we can’t continue to do things the same way.”

Beverly Hills strengthens effort to keep fentanyl off the streets