BHUSD investigating student’s ‘willful use of force’ on school employees 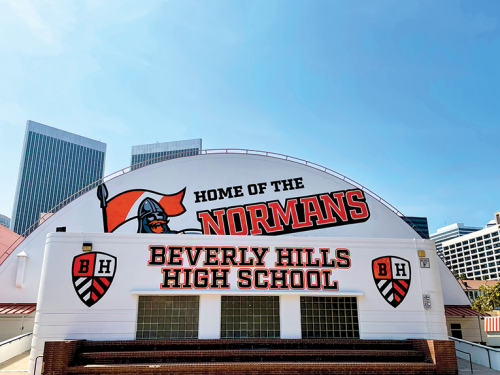 A Beverly Hills High School student on Oct. 20 had to be restrained by three security guards following an “incident [that] involved the willful use of force on school employees,” prompting an internal investigation by the district, according to an email from Beverly Hills Unified School District officials.

“Student and staff safety is and will continue to be our first priority. In rare situations where this is threatened, it is our job to reinstate that safety as quickly as possible. It is also our responsibility to de-escalate the circumstances contributing to the unsafe environment,” the email read. “After moving the incident away from other students and staff in an effort to limit the threat, the situation escalated. While two security guards restrained the student, the other security guard lay on the ground next to the student and used verbal communication techniques to support the student in de-escalating the situation.”

The email was signed by BHUSD Superintendent Dr. Michael Bregy and BHHS co-principals Drew Stewart and Kim Decatrel, and it was sent to all BHHS students, parents and staff in the district. It added that willful use of force on employees is a violation of the California Education Code and may be deemed a criminal act.

In an interview, BHUSD director of public relations Rebecca Starkins declined to comment on the age and grade of the student, and on what caused the escalation. She said that the district sent the email to counter misleading videos circulating on social media, which falsely depicted that a weapon was involved.

“It is really important to us that when we see these things happen, we provide timely and accurate information to the community. Often, snippets of videos captured are not representative of the entire situation, … that’s really why we sent out this email,” Starkins said.

Any students who feel uncomfortable or concerned are encouraged to seek support at the Norman Aid Wellness Center, the email read.

Asked for an update on Oct. 25, Starkins declined to comment.

“We are unable to disclose any further student or staff details due to privacy,” Starkins said.

It's time for Dodger Baseball