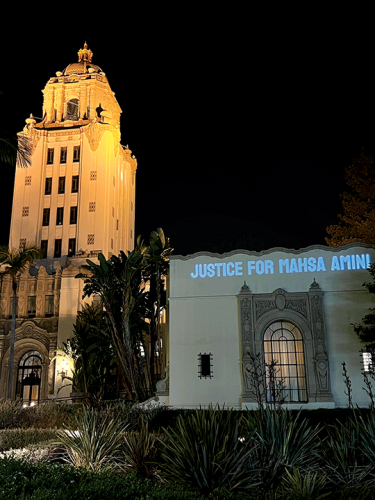 The Beverly Hills City Council unanimously voted to condemn Iran on Oct. 11 for the deaths of three women under the detention of the country’s morality police. Last week, Beverly Hills City Hall was lit in honor of Mahsa Amini, who’s death ignited a global wave of outrage. (photo courtesy of the city of Beverly Hills).

The Beverly Hills City Council voted unanimously on Oct. 11 to adopt a resolution condemning the beatings and deaths of three women by Iran’s morality police, and calling on the United States government to increase sanctions on and cease all negotiations with the Iranian Islamic Republic.

“The city of Beverly Hills strongly condemns the Iranian morality police for the evil, cruel and barbaric acts that led to the deaths of Mahsa Amini, Sarina Esmaeilzadeh and Nika Shakarami, and further condemns the regime for its brutality, anti-democratic oppression of its citizens and documented human rights violations, especially against women, students and minorities,” said City Attorney Laurence Wiener, who read the resolution before the council.

Wiener added that the resolution supports sanctions from the U.S. State Department on seven high ranking officials of Iran’s morality police for human rights abuses, and that the city also demands the U.S. consider additional sanctions to freeze the financial assets of Iranian government officials, while still allowing economic and medical aid to reach Iranian citizens. “The city of Beverly Hills is [also] gravely concerned with the nuclear capability of the government of Iran and the potential fallout to the region and the world. Therefore, [the city] implores the U.S. and the nations around the world to strongly advocate for Iran, to cease further development of nuclear power plants and weapons,” Wiener said.

The resolution further calls for an impartial investigation into the death of Mahsa Amini, and that the city honor her legacy by urging Iran to implement laws ensuring basic human rights for all of its citizens.

“The city of Beverly Hills strongly supports the right of all women to live a life without repression, brutal violence and restrictions.”

Beverly Hills’ resolution is part of a wave of global outrage following Amini’s death last month. The 22- year-old was detained by the morality police for violating the country’s hijab law, which mandates covered hair and loose fitting clothes for women, according to media reports.

While the country’s security forces claimed that Amini died of a heart attack, her family claimed she had been killed by blows to the head and was healthy at the time of her arrest.

Since Amini’s death, demonstrations have spread across the world, with the Iranian American Women Foundation holding a candlelight vigil in West Hollywood on Sept. 29, and the city of Beverly Hills lighting city hall in honor of Amini.

Councilwoman Sharona Nazarian, a Jewish Iranian immigrant, said she sees the unrest in Iran not as a religious, political or cultural matter, but as a human rights issue.

With roots dating back 3,000 years to the Ottoman Empire, Iran has a rich history of culture, science, poetry and math, and has a loving nature that values its elders, education and family, she added.

“The Islamic Republic, on the other hand, is a barbaric government that wants to harbor hate, terror, manipulation and violence,” Nazarian said. “The people of Iran have been persecuted and oppressed for over 43 years by the Islamic Republic. Who is there to speak up? I believe it takes the magical strength of a woman … who will fiercely stand up to the Iranian regime with the only weapon she has: her courage, her spirit and her soul, and it’s happening now.”