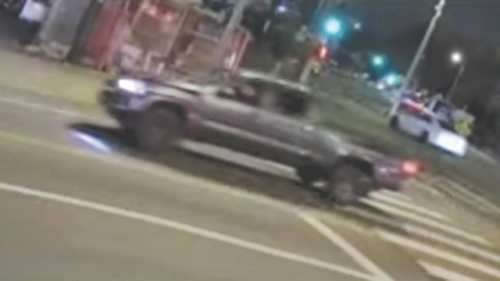 Police are searching for a gray pickup truck, possibly a Toyota Tacoma, that was involved in a hit-and-run on Oct. 1 resulting in severe injuries to a pedestrian. (photo courtesy of the LAPD)

Detectives from the Los Angeles Police Department’s Central Traffic Division are asking for the public’s help in locating a driver responsible for a hit-and-run in the Rampart Division on Oct. 1.

At approximately 9:50 p.m., a 22-year-old female pedestrian was crossing in the intersection of Eighth and Carondelet streets when she was struck by a dark-colored pickup traveling westbound on Eighth Street. The victim was knocked to the ground, and the driver fled the scene without stopping to render aid and identifying themselves, police said.

The Los Angeles Fire Department responded and transported the victim to a hospital, where she was admitted to the intensive care unit for severe injuries. The victim is still recovering.

The vehicle was described as possibly being a gray Toyota Tacoma. Video of the collision is posted on Central Traffic’s social media accounts at YouTube LAPD Central Traffic, Twitter @LAPDCTD24 and Instagram @LAPD_CTD_24.