What’s on deck at LACMA 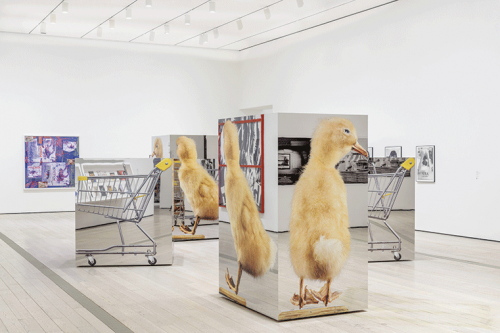 As the Los Angeles County Museum of Art makes progress constructing its ambitious new building, the institution continues to present a full palette of exciting exhibitions. On September 4, LACMA debuted Objects of Desire: Photography and the Language of Advertising. The exhibition traces how photographer’s artistic appropriation of advertising techniques expanded the medium’s possibilities for creative expression.

“This exhibition explores an underrecognized relationship between commercial and fine art photography,” said Rebecca Morse, curator, Wallis Annenberg Photography Department. “The exhibition places commercial photography at its center – examining where artists have imitated its look, appropriated its content, adopted its distribution methods and generally exploited what has historically belonged to a strain of photography in the service of commerce,” Morse added. Objects of Desire features work by 34 artists, including Sarah Charlesworth, Barbara Kruger and Hank Willis Thomas, among others. The exhibition also expands its reach beyond the museum with complementary works including a billboard by Larry Sultan and Mike Mandel, a bus shelter by Jeffrey Stuker and a mock advertisement by Chris Burden broadcast on social media.

“Most of the works in this exhibition are drawn from LACMA’s collection,” said Michael Govan, LACMA CEO and Wallis Annenberg director. “We’re pleased to display these works alongside recent acquisitions and contemporary works to showcase the breadth and depth of the museum’s photography collection and our dedication to exhibiting innovative lens-based artwork.” The exhibition will remain on view on Level 2 of BCAM through December 18. Across the way in the Resnick Pavilion, visitors can explore Modern Korean Art. On view from Sept. 11 – Feb. 19, The Space Between: The Modern in Korean Art includes over 130 works dating from 1897 to 1965. Loosely organized chronologically, stylistically and conceptually, the exhibition showcases European-influenced art via Japan in the Korean Empire (1897- 1910) and colonial period (1910-45), American influences absorbed throughout the Korean War (1950-53), and the nascent beginnings of contemporary work.

On Oct. 8, Scandinavian Design and the United States, 1890- 1980 will open in BCAM level 2. The groundbreaking exhibition is the first to examine design exchanges between the United States and Nordic countries like Denmark, Finland, Norway and Sweden. Scandinavian Design and the United States showcases over 175 pieces of furniture, textiles, ceramics, metalwork, jewelry and lighting. Bobbye Tigerman, Marilyn B. and Calvin B. Gross Curator, Decorative Arts and Design at LACMA note that this exhibition, “proposes a new narrative of design history, an alternate to the Bauhaus-centered story that focuses on Germany and central Europe. It posits that Scandinavian culture and design had a crucial impact in the United States, beginning in the late 19th century.” Govan added that the upcoming exhibition, “[illustrates] how Scandinavian design has had a lasting impact on American life and how that cultural exchange was mutual.”

Scandinavian Design and the United States, 1890-1980 will be on view in BCAM through February 5.

LACMA’s fall slate of exhibitions will present an array of works from across the globe with focused themes and original points of view. In addition, gems from the museum’s permanent collection remain on view, including works by Picasso and Judy Chicago in the Frank Gehry-redesigned Modern Art galleries, and signature monumental pieces like Richard Serra’s “Band,” Mark Bradford’s “150 Portrait Tone,” and Chris Burden’s “Urban Light.” As LACMA makes headway on its new building, pouring foundations and installing rebar, the museum continues to install exciting new exhibitions and present the permanent collection with flair.